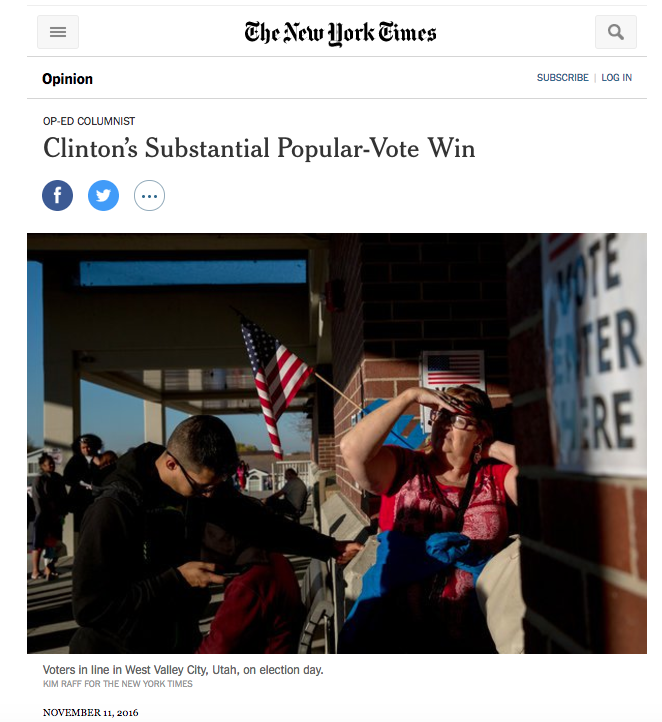 “Hillary Clinton didn’t just win the popular vote. She won it by a substantial margin.”

The latest headline from the New York Times may be somber and frustrating, but let it provide some solace to our supporters and members. This election was not all for naught.

By the time all the ballots are counted, she seems likely to be ahead by more than 2 million votes and more than 1.5 percentage points, according to my Times colleague Nate Cohn. She will have won by a wider percentage margin than not only Al Gore in 2000 but also Richard Nixon in 1968 and John F. Kennedy in 1960.”

Bros4Hillary isn’t going away. This has been an awesome community and an awesome platform for progressive mobilization. We will continue to press forward in advancing the issues we care about.

For now, rest up. Heal. Cry a little (or a lot). Go for walks. Hug loved ones. Do the things that make you happy. Recover. Reclaim your happiness.

In the short run, disrupt all islamophobia, homophobia, racism, xenophobia, and general bigotry that you encounter. We will experience a short Brexit-style surge. We will defend victims of bigotry whenever and wherever we encounter them. We must defend those who are vulnerable. We will be strong together.

In the medium run, we will use political coordination to defend gains made under President Obama. In 2018, we will re-take the Senate. This will be our project.

Daniel Fusselman is the Director of Social Media at Bros4Hillary. You may reach him directly at here.