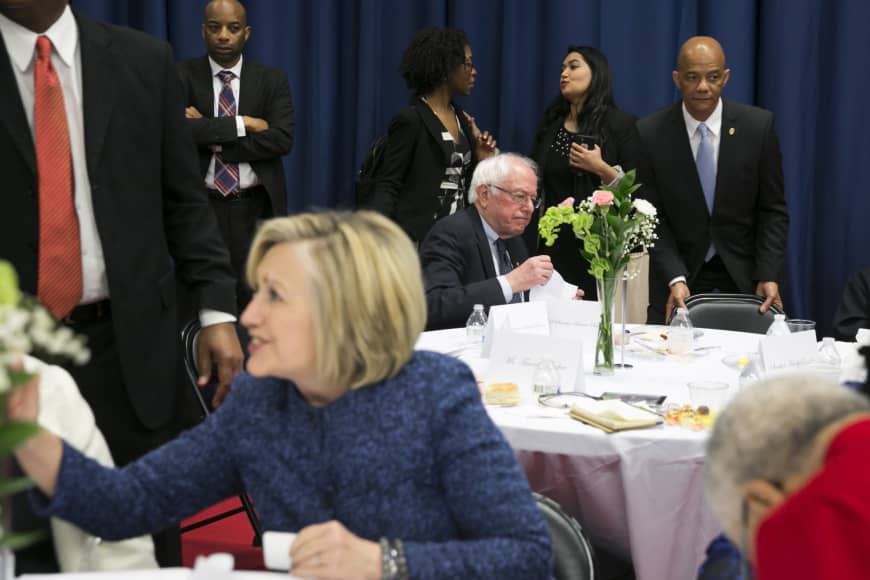 You can't sit with us. Sen. Bernie Sanders (I-VT) and Hillary Clinton, former U.S. secretary of state, attend the Martin and Coretta King Unity Breakfast in Selma, Alabama, Sunday. This event celebrates the cultural and spiritual diversity of the Voting Rights Movement and calls for people of all faiths to work together. | BLOOMBERG

Former Secretary of State and 2016 popular vote winner for President of the United States Hillary Clinton seemingly announced this week that she would not be running for the Oval Office in 2020 in an interview with a New York local news station. THE RESIST REPORT Panelists Alex Mohajer, Daniel Fusselman, Rance Collins, and Thomas McAbee weigh in on this week’s episode on whether the announcement was actually an announcement or whether it was misinterpreted by the news media.

The announcement unsurprisingly drew the taunts of Donald J. Trump, the illegitimate victor and Clinton’s former rival, which elicited an epic clapback from the former Democratic nominee.

Hillary Clinton was in Selma, Alabama this week speaking about voter rights and suppression at the Martin and Coretta King Unity Breakfast where she received a Lifetime Achievement Award. Her speech was nothing short of inspirational.

Episode 3 of The Resist Report is touching on all of the week’s biggest headlines and current events items, including former Trump attorney Michael Cohen’s explosive testimony before the House Oversight Committee, a potential cure for HIV, the HBO documentary Leaving Neverland, and the panelists’ stories of Election Night 2016.