Where Have All the Deplorables Gone? [NSFW] 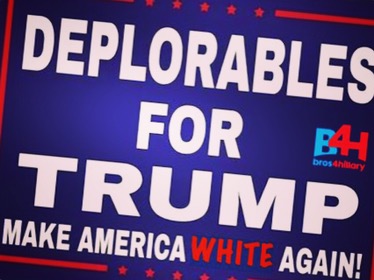 [Editor’s Note: Some of the language contained in the following editorial may be potentially offensive or triggering to some readers, or inappropriate for children. -AM]

Even after the ballots are counted, lawn signs removed, and “Madam President” becomes familiar rolling off of our tongues, we will not have to look far to see the continued red-hot anger and hatred flowing from Donald Trump’s supporters. The basket has no lid.

The list of shocking and offensive pejoratives seems to continue ad infinitum, especially in the Twittersphere, where one need look no further for examples than our very own Bros4Hillary Twitter feed, a frequent target for trolls who support the Republican nominee.  But offline, these words can be heard chanted at virtually every Trump rally and can be seen on buttons, bumper stickers, t-shirts, and lawn signs set proudly on display for all to see. For children to see.

A kind of mob mentality has consumed the Republican electorate and has snowballed so far out of control that they are now turning on their own party in a blind frenzy. The Republican Party has imploded and Trump has given his blessing for the “Deplorables,” as they have come to be known, to openly demonstrate their misogyny, racism, and xenophobia.

Indeed, to the Deplorables, spewing this vile language feels as good as taking a tight bra off at the end of a long day.

I Can’t Wait For This Election To Be Over!

Except it won’t really be over. On November 9th, Americans will be able to watch television without being assaulted by vile political ads, Hillary will likely forego any plans for a nap and diligently start planning her transition to the White House, and her supporters will finally be able to breathe a sigh of relief that this nightmare of a campaign season is over.

Soon, however, we will need to start facing an unfortunate reality: that a new (or perhaps, renewed) sociopolitical climate has inevitably been born from this campaign, one where millions of Americans are enraged by their misguided belief that a woman, for whom they feel a visceral hatred, rigged the system and stole the election from their messiah. One where an entire portion of the electorate is comprised of angry and disenfranchised white people, terrified of the impending minority take-over, duped to believe that the source of their economic stagnancy is the woman who was just elected president over their conspiracy theory-laden objections and assassinations of her character.

If we think that the anger in America is bad now, we still haven’t seen the long term effects of Trump’s rhetoric on his impressionable voter-base. What we know is this: in a matter of months, Donald Trump and his surrogates have erased a great deal of the progress we have made in the past fifty years regarding gender and race equality. The central tenet of Donald Trump’s campaign has been the confounding slogan and sort of Trumponian war cry, “Make America Great Again.”

Great again? It is not clear what period of time Mr. Trump would like to go back to so as to restore America’s greatness, but apparently, the “progress” we have made in the interim was merely a smokescreen called “political correctness.”

And we all know how Trump and the Deplorables feel about being politically correct.

The hate never went away. It was just pushed down below the surface. Pushed into the closet, if you will. Now the closet door has blown off the hinges and it’s contents can no longer be contained.

In June 2013, the Supreme Court struck down Section 4 of the Voting Rights Act, the provision that specified which portions of the country were required to have amendments to their voting laws cleared by the federal government or in federal court. In his rationale, Chief Justice John Roberts, representing the majority in the 5-4 ruling, basically opined (and I’m paraphrasing here) that that racism is over. Conventional wisdom told us that SCOTUS was wrong but I confess, I had hoped that maybe the lid that had been put on racism had silenced it enough that we could hope for its extinction through generational attrition of derogatory language and thought. I had hoped that our grandchildren would grow up believing that everyone is created equal.

Then Donald Trump announced his candidacy for president in June 2015.  What ensued has been 16-months of Donald Trump and the Deplorables. The news is scattered with daily stories evidencing the repercussions of his hateful campaign rhetoric: children on playgrounds taunting their darker-skinned classmates with threats of deportation, at rallies yelling “take that bitch down” while standing next to proud papas wearing t-shirts urging “Trump That Bitch” and “I Wish Hillary Had Married OJ.”

We’re witnessing the birth of an entirely new generation of bigots. This new bigotry expands beyond their grandfathers’ hatred of “colored folks” and now includes hatred of women, foreigners, non-Christians, the educated, LGBTQ, and pretty much anyone who knows the difference between “your” and “you’re.”

This Isn’t Over, Folks.

Trump’s “scorched earth” approach to the final days of his ultimately divisive and harmful campaign may be a sign of things to come.  Just as Trump is burning down the GOP, his supporters have been emboldened, given a platform, and told that their words and actions are acceptable. The media’s ultimate failure to fulfill its role as societal gatekeeper earlier on in this process shall have negative long-term repercussions on the American psyche as the Deplorables carry the mantle well after the election is over.

Therefore, a resounding Hillary Clinton victory sends our children and our society an imperative message: love and unity wins out in the end. That a woman whose campaign slogans are “Love Trumps Hate” and “Stronger Together” can prevail over a man who we know now has abused women. We must reject with a united and immovable voice the hatred and bigotry that the Deplorables now feel is the America that is possible.

“I am the last thing standing between you and the apocalypse,” Hillary joked recently at a high-profile fundraiser.

They say there’s a grain of truth in every joke.