4-Year-Old Delainy Has a Special Message for Hillary 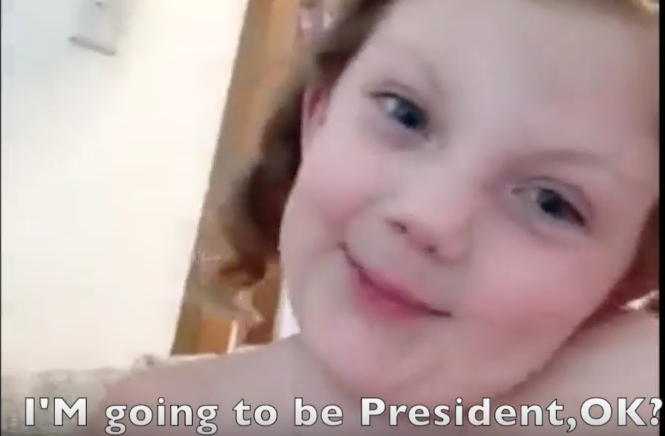 Our very special Bros4Hillary member, 4-year old Delainy Sellem of Boulder, Colorado, had this very important message for Hillary Rodham Clinton the morning after the disappointing results of the presidential election. We think you’ll want to here what Delainy has to say.

Delainy’s mom, Chelsea Beck Sellem, told Bros4Hillary, “my half-naked four year old made me pinky promise I would get it to Hillary.”

But Delainy’s message resonated with the leadership team at Bros4Hillary. In the past few days, we have all struggled to make sense of the outcome of this election. But little Delainy’s message warmed our hearts and renewed our perspective and our purpose. This is why we did it. The tears, the sweat, the grueling hours, the sacrifice, day in and day out, living with Hillary’s presidential ambitions at the forefront of our hearts and minds. This.

“She really does think she can be president one day because of Hillary,” said Mrs. Sellem. “I’m glad she can bring a smile to people on this sad day.”

Is there any doubt as to the impact Hillary Clinton has had on history? She may not have won the presidency (according to the electoral college– the popular vote will always declare her the victor), but whether we realized it or not, she has silently changed the world. She has created a discourse and a culture that will pierce through, despite what appears to be the beginning of a difficult road ahead. One in which little girls believe with all of their might that they, too, can do anything they set their hearts and minds to.

This is our legacy. This is what we did it for. It was not all in vain. And we will continue to fight in HRCs name to make sure Delainy is able to grow up in a world where every child has the chance to live up to his or her own God-given potential.

Thank you Hillary. We honor you.

Alex Mohajer is the political director of Bros4Hillary and serves as the Editor-in-Chief of BrosBlog. You may contact him via twitter @alexmohajer.