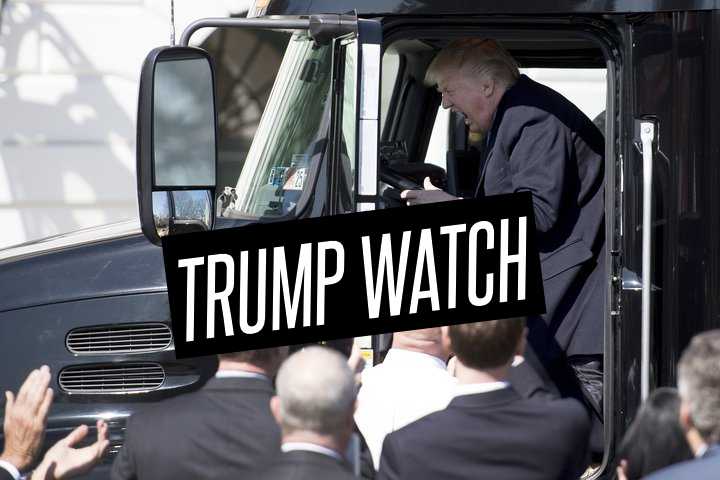 “Obamacare is the law of the land!”

US President Donald Trump gets into the drivers seat of a semi-truck as he welcomes truckers and CEOs to the White House in Washington, DC, March 23, 2017, to discuss healthcare. / AFP PHOTO / JIM WATSON (Photo credit should read JIM WATSON/AFP/Getty Images)

THESE ARE A FEW OF DONALD’S FAVORITE THINGS

This whole week has been a total shitstorm of developments all across the Trump front, whether on issues with his SCOTUS pick or with the Health Care bill he very abruptly tried to force to a vote yesterday this whole weeks can be viewed as disastrous for Donald Trump and perhaps a signifier that the end is near.

Either way, this is not tenable and cannot continue on like this.  Congressman Ted Lieu This whole week can only be described as batshit crazy.

DONALD WANTED A VOTE TODAY AND ALL GOT WAS THIS OBAMACARE

THIS AFTERNOON, news broke that the Trump Administration officially PULLED TrumpCare and will no longer seek to repeal or replace it as previously promised. “Obamacare is law of the land,” said Speaker of the House Paul Ryan.

Donald Trump was previously demanding a vote on his health care bill today after the one originally scheduled for yesterday was postponed out of necessity: By day’s end it was apparent that the health care bill, the one in which House Speaker Paul Ryan has said Donald Trump is “all in,” lacked the Republican votes in the House necessary for passage. Rather than lose on the first go, House leadership decided to postpone. It is decidedly a victory for those in favor of maintaining the Affordable Care Act.

Indeed, after a few long weeks, Donald Trump has decided he is DONE NEGOTIATING HEALTHCARE. If the health care bill fails, Obamacare stays.

I am sure this has nothing to do with the fact that the GOP was terrified in the final days leading up to yesterday’s vote, of backlash from their constituents.

Senate Democrats announced yesterday that they will filibuster Neil Gorsuch’s appointment to the Supreme Court, citing the following subsection of this digest as the reason why. Tis a good one.

The beginning of this week saw FBI Director James Comey announcing that there was an official DOJ investigation being launched into potential collusion between Trump’s campaign and Russian hackers in the 2016 presidential election, as far back at July 2016. From the Huffington Post:

CALIFORNIA IS IN THE HO– USE!

Congressman Adam Schiff is KILLING IT in the House these days. Our representative from my home district of California’s 28th in his opening statements to the committee investigating possible Trump collusion with Russia.

And last but not least, there’s none other than our fave: Maxine Waters: