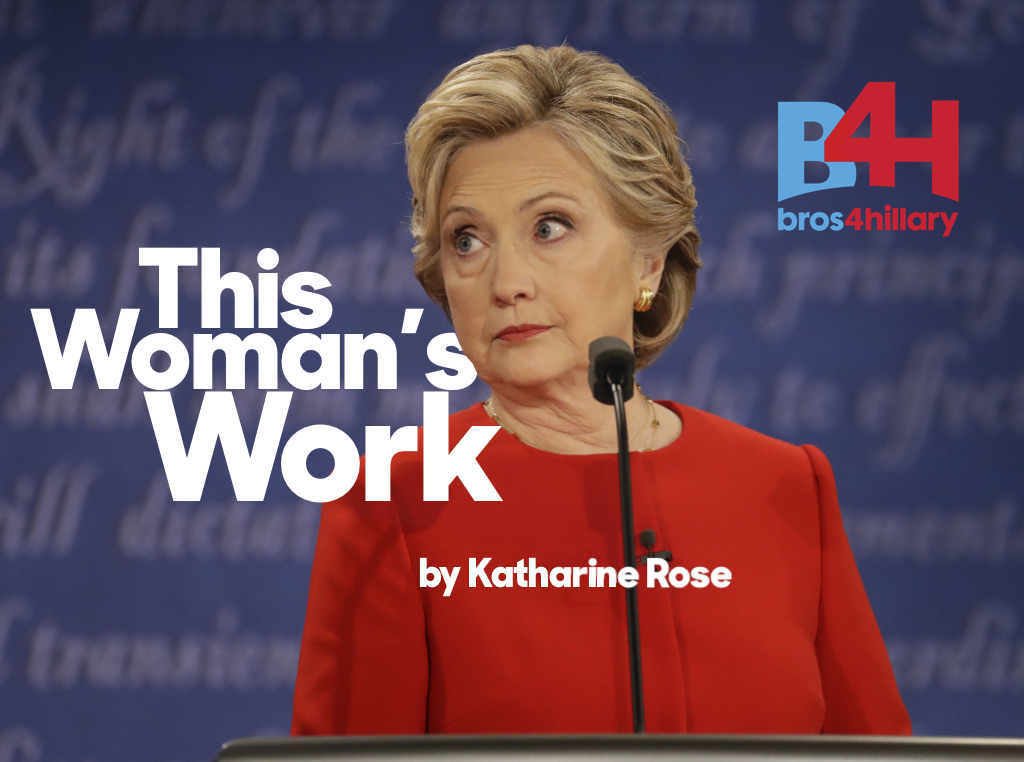 Democratic presidential nominee Hillary Clinton during the presidential debate at Hofstra University in Hempstead, N.Y., Monday, Sept. 26, 2016. (AP Photo courtesy of Julio Cortez)The debates are over and an impressive majority agree that Hillary won all three of them. She was prepared with facts and figures. Her understanding of both domestic and global issues can be matched by maybe a handful of people in the world, if anyone at all.

She has plans for just about every issue you can think of and they are all complex because the issues are complex. The level of detail in the solutions that Hillary has set forth is often where she starts to lose support because many people just don’t understand the nuances. There are too many components that cannot be summarized in a nice little catch phrase and Americans love their catch phrases. Perhaps Hillary’s catch phrase should be, “Hey! If it were that easy to fix, it would have been fixed by now! Duh!”

I found myself standing in my living room yelling at Donald through the television in moments when I wished that Hillary would have looked over at him and set him straight, or told him he’d gone too far, or simply told him to just STFU. But she couldn’t do that. She knew it, I knew it, and millions of women around the world knew it. The double standard is something that women have learned to live with and it infuriates me. It must stop. In order to stop it has to be acknowledged so I have a little message for the men of the world; you are not superior to women.

Of course I cannot paint all men with the same stroke. There are some members of the male persuasion who truly view women as equals [Editor’s Note- see: Bros4Hillary. -AM], and to them I pay a debt of gratitude. But the systemic misogyny and sexism that runs rampant in our culture is undeniable.

Of course the problem here is that this systemic misogyny and sexism are allowed to continue because of people who are ignorant to it’s existence and believe they are not complicit…that sexism is over. Knowing is half the battle, as they say. Evidence of this can be found in the ways with which men- and even some women- can easily criticize, discount, and discredit the thoughts and opinions of women.

We are equal but we are not the same.

If people would acknowledge and embrace the fact that equality does not mean that we are all the same, we could start moving towards a solution. A pound of sugar equals a pound of cinnamon but sugar and cinnamon are not the same.

Men and women do not always think alike. We do not always express ourselves in the same way. In those instances when men are quick to easily reject the thoughts and opinions of women, it’s because women rarely express their thoughts in the same ways that men do. Therefore, what men hear may sound wrong, or not in the best form possible, and so women are told to change the way they’ve expressed themselves to suit the ears of men.

Patriarchal and male-dominated power structures are hard to shake up. Traditionally, in order for women to advance in professional settings, they have been required to learn to adapt to the thinking of their male counterparts, while in essence losing a part of themselves in the process. This can and has resulted in the past in subsequently losing their ability to really connect with other women. Worse yet, women have learned to shut up about it. To just accept it. To work harder to prove themselves within the male-dominated paradigm, rather than to fight to shift the narrative.

It is for those reasons that so many women in America are appalled that Hillary Rodham Clinton, who is without question the most accomplished and qualified person to ever run for the presidency, has to compete with someone who isn’t qualified to scoop cat litter. This most definitely would not be the case if Donald J. Trump were actually Donna J. Trump. But Donald is a man and many men, also many women, think that men are superior, whether expressly or as a sentiment engrained in their subconscious by lifetimes of gender norms telling them so. Why is that?

The evolution of thought isn’t hard to follow. Going back to prehistoric neanderthals and beyond, women relied on men as their protectors for survival. Physical strength was, and still is, a very desirable trait. But the world around us has changed and somehow the transition from the cave to the boardroom has resulted in a false equivalency between physical power and brain power.

For decades women have been trying to combat a mindset that is so old it would seem to be part of our DNA. Our task is not an easy one and it is made even more difficult by the insistence that women be polite in the process. Assertive men are respected. Assertive women are denigrated.

Men are free to be their true selves in the business world. Men can respond to questions with their gut reactions. Women have to measure each word and craft each response to suit the thinking of both men and women. Men have grown accustomed to telling women how they should think, whereas women have had to learn how to think like men.

You can see this at play in practically every criticism that has been dished out to Hillary during her entire career. Criticisms about her voice being too “shrill,” characterizing her as angry any time she should raise her voice, constant commentary on whether she smiles enough, how she is dressed, whether she is too serious or not serious enough, and of course, whether or not she’s trustworthy. Women have to learn how to play the game like a man and even when they do they are still told that something is just a bit off.

Hillary has mastered the game and to many people she still isn’t good enough.

She has learned to be quiet. She has learned to ignore the criticism. She knows that her achievements must be double that of every man if she is to be taken seriously. No one measures her words more carefully than Hillary does. Even then, she is criticized for being cautious. Too guarded.

What greater evidence of this than the fact that millions of people in America, after comparing the resumes of the two, would still rather vote for Donald than Hillary. This would baffle me if I weren’t a woman in the workforce who has personally witnessed and experienced the same misogyny.

It is time for women to grab the male-dominated paradigm by the hair and drag it out of the cave!

And for the men, I challenge you to try something new: The next time you are collaborating with a woman in any professional capacity, expand the manner in which you view her work. Stop trying to turn it into something that you would have produced. Acknowledge that perhaps her sugar isn’t the same as your cinnamon and that they both are delicious.

After all, there are more of us than there are of you and we’re getting more powerful by the day. Rumor has it that one of us is about to become the President of the United States!

*The author of this article wishes to express that serious deliberation was given to the message and the audience of Bros4Hillary when writing this piece. It is due to the author’s mad respect for the capacity of understanding within this audience that it has been published.

Contributions by Alex Mohajer, the Political Director of Bros4Hillary and serves as the Editor-in-Chief of BrosBlog. You may contact them directly here.