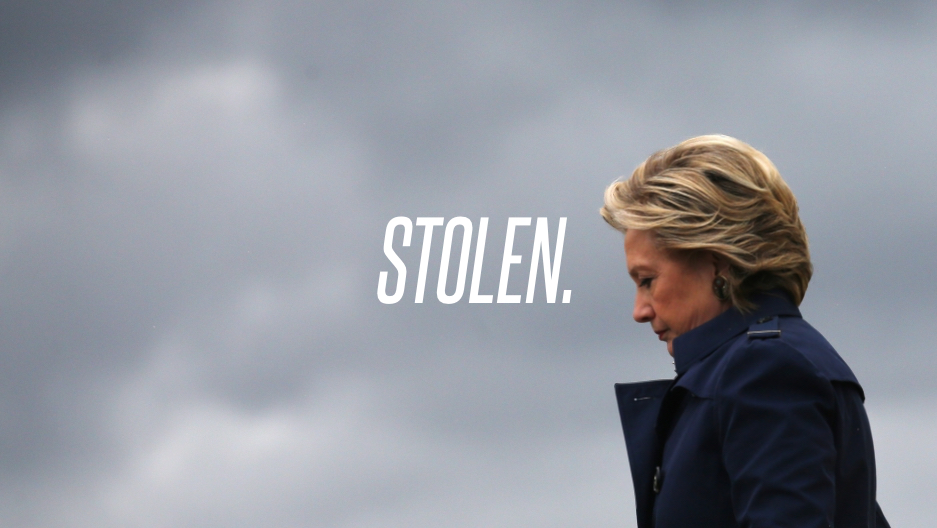 [This article first appeared in The Huffington Post on January 15, 2017.]

UPDATE #2: January 27, 2017 at 10:53 p.m. PST — After drawing the ire of Tucker Carlson, Fox News, and Breitbart, none of whom gave this piece any good faith attempt to understand, independent journalist David Pakman did a fantastic interview with me on the actual subject matter. You can check out the respective clips below.

UPDATE #1: January 19, 2017 at 1:48 p.m. ET — A few notes. My piece is not calling for judges to issue decrees that are not based on an action brought before the court. Courts rule on controversies, and my position is that in ruling on these controversies they are granted broad discretionary power to remedy wrongdoing in our elections.

Additionally, there are about twenty cited sources in this piece. Maybe the least significant of them is an article from a 1987 edition of the Executive Intelligence Review, written by Kathleen Klenetsky, not Lyndon LaRouche, and is used to show that a relationship existed as far back as 1987. The EIR has been fairly criticized as being pro-Kremlin propaganda, but that is part of the reason WHY the contents of the article (a pro-Kremlin piece about Trump traveling to Russia) are even MORE troubling and therefore worth noting. Removing the EIR article doesn’t change the argument at all. The veracity and weight of the evidence should be left for the reader to decide.

Finally, I regret that as a nation, we can no longer have a debate or a disagreement without seeking to destroy one another. At the end of the day, we may be on opposite sides of an argument, but that doesn’t make us enemies. I openly wished Donald Trump success only a week ago on a different Fox News broadcast. My views about the legitimacy of the election do not contradict that. We are all Americans just trying to find the best way forward. Please read this 2013 New York Times piece about enemies versus adversaries that has been very important to me for years. If I have one wish for our country in the aftermath of this election, it is that we can heal this problem first and foremost.

PREVIOUSLY: On Friday, a prominent Democrat on Capitol Hill finally said it.

“I don’t see this president-elect as a legitimate president,” said Representative John Lewis, D-Ga., in an exclusive interview with NBC News. “I think the Russians participated in helping [Trump] get elected. And they helped destroy the candidacy of Hillary Clinton.”

In making the controversial declaration, the widely revered civil rights leader gave voice to a growing number of Americans who have watched in abject horror as the presidential transition of an increasingly belligerent Donald Trump unfolds. The unrelenting onslaught and sheer breadth of scandal and conflict has left an American electorate fatigued and uncertain as to the best path of resistance following a protracted election season that may be the most volatile in history.

As Americans, we are culturally predisposed to seek rapid closure rather than answers, oftentimes more comfortable expressing outrage at a perceived injustice than we are willing to remedy it. In grief and in politics, we are taught to stick to the script.

Trump’s predictably offensive response to Lewis (a Twitter rant in which he referred to the civil rights icon as “all talk” and “no results” on Martin Luther King, Jr. weekend) marks the umpteenth time he has capitalized on this cultural predisposition, baiting Americans into a partisan squabble over who will protest the inauguration in abstentia, and successfully steering us away from the truth that Congressman Lewis spoke to power on Friday: 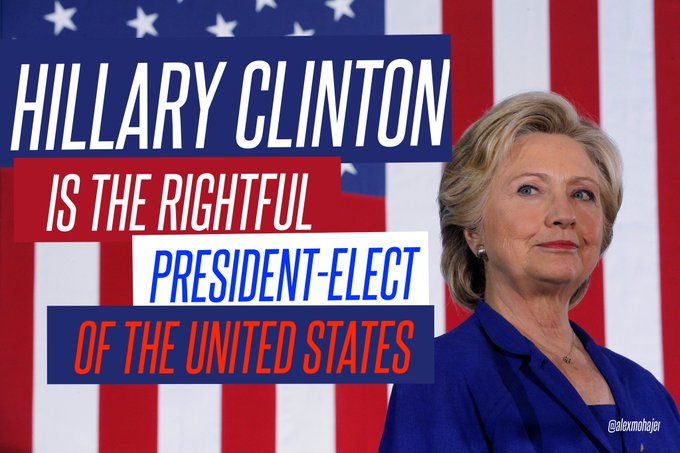 Hillary Clinton is the rightful President-elect of the United States.

Every major intelligence agency in the country has reached the same conclusion: Russian hackers engaged in cyber attacks with the express purpose of helping Donald Trump win the election. They operated at the directive of Russian President Vladimir Putin, apparently motivated by his hatred for Clinton. As secretary of state, Clinton was “by far the most aggressive and outspoken” American official to counter Putin’s efforts to expand his global reach, famously criticizing him for undermining his own elections and likening him publicly to Hitler.

Clinton’s brass in standing up to Putin, by all accounts a murderer and former KGB Agent who has bombed civilian hospitals in Aleppo and is the primary backer of Syrian dictator Bashir Al-Assad, should have inspired, at the very least, a nod of respect from conservatives.

Instead, Putin’s approval ratings have gone up among Republicans. Years of partisan squabbling have trained both sides to turn every political conflict into a ‘Democrats versus Republicans’ issue, and subsequently conservatives would rather side with Putin than acknowledge the legitimacy of a Hillary Clinton presidency. The result? A troubling trend towards normalizing Trump’s ‘unpresidented’ behavior, and a reluctance to look at the evidence.

Clinton made history when she became the first female major-party nominee for President of the United States. She won the popular vote by nearly three million votes, a 2.1 percent margin over her opponent, and won more votes than any other presidential candidate in history, second only to Barack Obama (whose 2012 tally she tied).

Echelon Insights conducted a study of top election-related controversies in 2016. Their conclusion was that anti-Clinton themes dominated in the final days of the campaign. Negative coverage of Wikileaks and Clinton’s e-mails received over 50 MILLION combined mentions. By comparison, Trump’s Access Hollywood tapes received only 5 million mentions. Could 50 million negative media mentions have affected Clinton enough to give 80,000 votes to Trump?

Donald Trump has been openly dishonest about his relationship with Vladimir Putin and his ties to Russia. An EIR article from 1987 claims the Russian government was gifting Donald with all-expense paid trips to Moscow and grooming him for a presidential run.

The EIR’s reputation as a news publication as a whole is questionable and has been called anti-semitic. It is known, even, to promote pro-Kremlin propaganda. This, however, makes the contents of the article even more problematic.

There is a great deal of additional evidence suggesting Donald Trump’s connections to Russia: dishonesty about having a relationship with Vladimir Putin, his openly broadcasting his request in July 2016 that Russia hack Hillary Clinton’s e-mails, the fact that Trump’s campaign made contact with Russian officials after the election, and ultimately Mr. Trump’s reticence to disclose his foreign assets, paint a troubling picture of a president-elect groomed, owned by, and acting in concert with a hostile foreign power.

In a blatant violation of protocol, FBI Director James Comey released a letter a week before the election in which he suggested that Clinton was under investigation for criminal wrongdoing related to— you guessed it— her e-mails.

Of course there was no wrong-doing. Comey acted to influence late-deciding voters in an abuse of authority that is now being investigated by the Department of Justice. Comey had information in October regarding Trump team members reportedly having contact with Russia, which he did not disclose, a subject he refused to address in a hearing on Capitol Hill this week.

“Comey had a large, measurable impact on the race,” said Nate Silver, Editor-in-Chief of FiveThirtyEight. “Late-deciding voters broke strongly against Clinton in swing states, enough to cost her MI/WI/PA.”

“’l’ll put it like this,” Silver continued. “Clinton would almost certainly be President-elect if the election had been held on October 27.”

Courts Have The Authority To Intervene

It is well-established that in shaping equity decrees, federal courts are vested with broad discretionary powers, and a plethora of case law exists stating that courts may intervene to protect the integrity of free and fair elections. While true that a presidential election has never been overturned, cases like Donohue v. Board Of Elections, which arose from the 1976 presidential election, have ruled that the authority exists to order a special election, even at the presidential level. The judge reiterated that “protecting the integrity of elections, particularly Presidential contests, is essential to a free and democratic society.” (Donohue v. Board, 435 F. Supp. 957 (E.D.N.Y. 1976))

Federal courts have broadly exercised their powers in enjoining persons from taking office and voiding elections.

In Marks v. Stinson, a controversial 1994 case from Pennsylvania, a sitting state senator was actually vacated from office and replaced by his opponent after it was revealed that he colluded with election officials to commit voter fraud. The Court found that one party would have won “but for the wrongdoing” of his opponent, and the “wrongdoing was aimed to benefit one candidate and disadvantage the other.” (Marks v. Stinson, 19 F.3d 873 (3d Cir. 1994))

Various types of misconduct, not just voter fraud, are suitable to prove “wrongdoing.” Marks merely required that the wrongdoing be substantial such that “it could have affected the outcome of the election, and it rendered the certified vote count an unreliable indicator of the will of the electorate.” Id. at 886.

Did Russian hacking or Comey’s letter occur to benefit one candidate and disadvantage the other? Could either have affected the outcome of the election, such that the certified vote count was an unreliable indicator of the will of the electorate?

If the answer is yes, then calling for judicial intervention and a new election, no matter how outlandish or uncharted, is our civic duty. Americans must resist our tendency to force closure and do what is necessary to protect our democracy, or we are doomed to relive the mistakes of the past.

In 1994, the Marks court offered a poetic, poignant message to the American people about our role in a functioning democracy, one that is so prescient and relevant that it seems almost especially crafted for the future voters of 2016:

Various voters testified that they were angered and disillusioned by the…election and its aftermath. Many citizens have expressed a common thread of pent up feelings reflecting a long suppressed disgust and outrage at the officials and the system responsible. It would be a delusion to conclude that the underlying evils which conceived and nurtured the wrongdoing involved have been eliminated. Only a concerned citizenry can do that. Only then will they have a permanent and justified confidence in the electoral process.