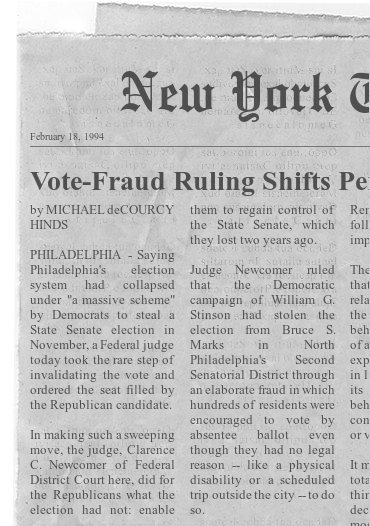 A 1994 federal court ruling out of Pennsylvania may offer some clues to Clinton supporters as to possible legal rationale for removing an elected official from office and replacing them with their erstwhile opponent.

UPDATE: Dec. 28, 2016, 10:15 p.m. — Author’s Note: This piece went viral. It was shared well over 200,000 times, spent some time as the top story on Google News, and was mischaracterized and twisted by various questionable sites to fit their respective agendas. For some this included impugning my integrity. PolitiFact interviewed me for a piece where they called out reports that mischaracterized my article, and generally vindicated me in that their legal scholar comes up with basically the same conclusion that I do. I never claimed that Marks v. Stinson was completely analogous or even plausible. But a further reading demonstrates that it is undeniably relevant. Please read my update to this piece: With Regards to Hillary, Russia, and Overturning Elections

PREVIOUSLY: The Washington Post dropped an explosive story last Friday night alleging that Russians in the highest echelons of the Kremlin did in fact interfere with the 2016 presidential election with the express goal of assisting Republican candidate Donald Trump secure a victory over his rival, Democratic candidate Hillary Rodham Clinton. The piece revealed, among other things, that a CIA assessment detailing this conclusion had been presented to President Obama and top congressional leaders last week.

The full breadth and scope of Russian involvement is still unknown to the American electorate, although Secretary Clinton and President Obama attempted numerous times during the campaign season to convey reports of cyber attacks against the Clinton campaign and the Democratic National Committee.

Clinton supporters are seeking out any possible legal remedies available to them in the unlikely event that the president-elect is proven to have engaged in fraudulent or conspiratorial conduct that supported foreign interventionism, or is proven to have had some outright effect on the outcome of the election.

To be clear, no clear constitutional remedy exists to halt the certification of a presidential election. Article II of the U.S. Constitution vests Congress with the power to determine the date by which the Electoral College will cast their votes, presently set for December 19. The GOP-controlled House has no incentive to aid Democrats in a Hail Mary move for the White House, even if their own opinions of the president-elect are less than favorable.

In recent weeks however a massive online movement asking members of the Electoral College to become “faithless” or “conscientious” electors and to break from their state to vote for Clinton instead of Trump has garnered national attention. The electors would be well within their constitutional authority to do so, say groups like Hamilton’s Electors, which claims that the purpose of the Electoral College is to prevent “demagogues like Donald Trump” from assuming the nation’s highest office. A petition urging the Electoral College to make Hillary Clinton president has gained nearly 5 million signatures.

Proponents of the “conscientious elector” strategy are concerned, with good reason, about the likelihood it will succeed. With Donald Trump having won 306 Electoral College votes, 37 Republican electors would need to switch their votes to Clinton, a tall order, and in the event that no one candidate has 270 electoral votes, the decision would go to the Republican-controlled House of Representatives.

Some social media users have begun circulating the phone numbers of various state attorneys general, urging fellow citizens to contact them and request that the Electoral College voters be enjoined from casting their vote until such time that all formal investigations of Russian hacking conclude. Once the electors cast their votes on December 19, they fear, any constitutional means for preventing Trump’s road to the White House will be exhausted.

No evidence has surfaced to prove Trump, or any Republican for that matter, was complicit or participated in the alleged Russian activity. Trump supporters are understandably outraged at the movement to challenge the election, perhaps rightfully so, after Clinton chastised her opponent during the presidential debates for implying he might not accept the outcome of the election. That being said, a four-member team of Democratic and Republican U.S. Senators announced last week that they would be launching an investigative probe into Russian interference in the 2016 presidential election. For the time being, the effort seems to now include participants from both parties. Still, the likelihood that any hard evidence is produced proving voter counts were affected is slim, especially before the Electors cast their binding votes on December 19th.

However, at least one federal court decision suggests there may be some federal case law on the question of whether it is possible to invalidate the outcome of an election after the fact when there is fraud, and replace a candidate benefitted by fraud with his opponent. The case, Marks v. Stinson, is the first and only known case in which a federal judge reversed an election outcome.

In 1995, the U.S. Supreme Court declined to review an appellate court’s decision of Marks v. Stinson, a case originally brought before a federal district judge in Pennsylvania in 1993, which was subsequently appealed to the United States Court of Appeals for the Third Circuit in 1994. The Third Circuit partially upheld the federal judge’s decision to intervene and invalidate a 1993 state senate election due to fraud. Interestingly, the federal district judge ordered the winner be removed from office and the subsequent vacancy be filled by his opponent.

The 1993 state senate contest pitted Republican Bruce Marks against Democrat William G. Stinson. Stinson was named the winner, but was later accused of participating in a scheme with elections officials to commit election fraud. Namely, Stinson was accused of conspiring to cast illegally obtained absentee ballots in his favor.

In February 1994, after Stinson had already taken office, the federal judge ordered he “be removed from his State Senate office and that [his opponent, Bruce Marks] be certified the winner within 72 hours.”

Two of the elected officials who testified in the Pennsylvania case said under oath that they were aware of the fraud, had intentionally failed to enforce laws, and hurried to certify Stinson the winner in order to bury the story. To some, the narrative draws parallels to the Washington Post’s revelation that Republican Mitch McConnell was aware of the CIA’s conclusion that Russians had intervened and opted to do nothing.

The case deliberates interesting rationale that could theoretically be applied in part if, after Donald Trump assumes office, it is shown that Russian hacking (or any fraud, for that matter) robbed Hillary Clinton of the presidency. The case offers clues that imply courts may intervene.

Obviously both the stakes and the office in question are much higher than in Marks v. Stinson. There has been no case of first impression with regards to the presidency being overturned to a wrongful winner’s opponent.

There is also, of course, no constitutional Electoral College process or system in Pennsylvania, so the situations are not exactly analogous. But the reasoning behind the federal court’s decision may hold muster. It is not clear how the case would impact a presidential election.

As of December 9, Clinton has won the national popular vote by more than 2.8 million votes. According to Cook Political Report, the vote count has Clinton approaching 66 million votes, meaning the first female major-party nominee has already earned more votes than any other presidential candidate in history, second only to Barack Obama (the totals suggest she is on course to surpass the president’s 2012 count, as well).

Alex Mohajer is a contributing political writer and commentator to the Huffington Post. He currently serves as the political director of Bros4Hillary, a volunteer advocacy organization. Alex holds a Juris Doctorate from Chapman University School of Law and a Bachelor of Arts from UC Berkeley. Follow him on Twitter at: @alexmohajer,