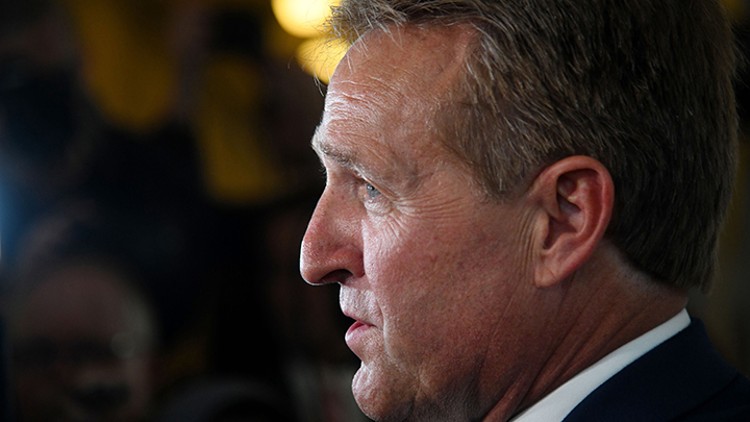 Republican Senator Jeff Flake of Arizona, who announced late last year that he would not pursue re-election this November so that he might govern unencumbered by political interests, begged Donald Trump not to fire Special Counsel Robert Mueller in a tweet sent to his half a million followers on Tuesday afternoon.

“We are begging the president not to fire the special counsel,” Flake tweeted on Tuesday afternoon to his half a million followers. “Don’t create a constitutional crisis. Congress cannot preempt such a firing. Our only constitutional remedy is after the fact, through impeachment. No one wants that outcome. Mr. President, please don’t go there.”

We are begging the president not to fire the special counsel. Don't create a constitutional crisis. Congress cannot preempt such a firing. Our only constitutional remedy is after the fact, through impeachment. No one wants that outcome. Mr. President, please don't go there.

The tweet came just two days after one that was sent to his followers that urged his fellow members of Congress to support Special Counsel Mueller finishing his investigation.

Members of Congress need to be vocal in support of Special Counsel Mueller finishing his investigation.

In recent weeks, Trump has been unusually erratic, even by his standards, in a very public, near-daily slew of firings that has gutted a good majority of his cabinet.

Flake confirmed his tweet and elaborated it in a statement given The Washington Post on Tuesday, stating that Mueller’s termination would  “force the Congress to take the only remedy that Congress can take.”

“To remind the president of [impeachment] is the best way to keep him from going down that road,” Flake continued. “To fire Mueller without cause, I don’t know if there is any other remedy left to the legislative branch.”

Flake, who has previously suggested Donald Trump be primaried in 2020 and has compared the president to Josef Stalin and Syrian dictator Bashir al-Assad, has been a consistent and vocal critic of the president since his inauguration. However, opposition to the president from within his party has been scarce to non-existent, at least publicly.

Users on social media did not immediately warm to Flake’s tweet, with some speculating that the Senator from Arizona is considering a 2020 presidential campaign or that he was merely grandstanding, pointing to the fact that Flake has ultimately voted to further Trump’s agendas and policies 92% of the time in his position as a Senator.

MoveOn.org is working in partnership with Bros4America to provide an instant response in the event that Special Counsel Robert Mueller is fired. You can join the event in Los Angeles or any number of events across the United States.