Samantha Bee to HRC: "You Deserve To Hear It 100 Times - It Should Have Been You!" 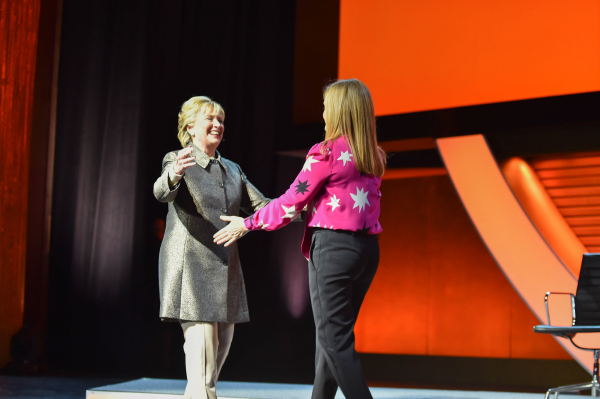 Thank you so much, it is an honor to be here at the 8th annual Women in the World Summit.

It’s amazing to look into the crowd and see so many women looking back at me. Almost as many as at a Full Frontal staff meeting. It’s a good thing there are some young people here or Hillary would think this was her 58th Wellesley College reunion.

I’m surprised Secretary Clinton was available to speak tonight—I assumed by now Hermione would have returned to her rightful home at Hogwarts, where she’s rumored to be the new Defense Against the Dark Arts professor. At least we’re hoping.

When I was first asked to introduce Hillary Clinton, I laced up my hiking boots, made a batch of GORP and googled “Westchester”, off to the woods I would go! So you can imagine my relief when I was told I only had to come to Lincoln Center.

(Oh, Hillary, I hope you watched our show last night. I gave you compliments. please come on our show one day no pressure just…)

The last person to introduce Hillary at this conference was Meryl Streep. So to all of you here tonight, I’d just like to say, I am sorry I am not Meryl Streep. Believe me.

It’s hard to know what to say tonight. I should be lauding Hillary for making time to be here despite her busy schedule as president. I should be talking about how she didn’t just shake Angela Merkel’s hand, but hugged her.

Instead, Mr. Trump is nearing his 100th day in office. I assume he will mark it the same way all school children do, by gluing 100 pieces of macaroni to a health care bill.

There are rumors Hillary may consider a mayoral bid in New York City. I know she would relish the opportunity to tell President Trump that this great city will not spend millions of dollars on an apartment for the first lady. Or she could at least demand that if we do pay for it, Bill would be able to live there as well.

There has never been a female mayor of New York City. Turns out there’s a glass ceiling here too, there’s just too many halal carts in the way to see it.

What comes next is something for Hillary to decide. It’s easy to see the appeal of spending your days in the woods, listening to Fight Song on repeat.

But of course Secretary Clinton is ready for something new. That’s so Rodham of her. There are only so many times she can play and lose the Hamilton lottery before looking for a new job.

Besides, what else would she do with her time? Play golf? It’s not like she’s the sitting president.

Hell, I was supposed to talk about you on my show for the next 4 years–and now I’m saddled with that pint of flat orange Fanta who gives me way more material than I’d ever want. I thought—and feared—that you being elected would unleash a wave of misogyny in the US. But as we’ve seen, that happened anyway—which is why we can’t allow ourselves to dwell on the fact that I had a celebratory blue-sequin custom suit made for my post-election show, and could *barely* wear it.

We may not know what the future will hold, but I’m hopeful that there is one.

And I believe it exists in the young women—and men—who live in this new unexpected reality, who see your legacy, Hillary, and work to build upon it. Specifically, the 3,000 women in this room today who I will most certainly sync up to if I stand here for much longer.

Of course there could also be a future for you on basic cable if you’re interested in any sort of development deal. You’ll see that venting on TV once a week for 21 minutes is actually quite cathartic. You’d feel right at home—the haters will still call you shrill.

Though I know your work is not yet done, your mark has already been made, and you inspire people in so many different ways. Your work and its legacy is a beautiful thing to share with my daughters—to show them that the passions they have when they are young can become not just a career, but can lead to a lifetime of fulfillment and meaning. I know you don’t just mean that to me.

Today Hillary will be interviewed by Failing New York Times journalist Nicholas Kristoff. Can you believe, she had to take off five months of campaigning just to prep for this interview? That’s a lot of missed trips to Pennsylvania and Michigan.

Every year Kristof holds a “Win-a-Trip with Nick Kristof” contest, where he chooses someone to accompany him on a reporting trip around the globe. I saw Hillary give him her application backstage. The essay portion merely said, “get me out of here.” But Nick, you really should consider her—she’s been working on her hiking and outdoors skills.

In any event, it is an honor to be here with both of them tonight, and I look forward to hearing what Hillary can say when the person she’s sharing the stage with isn’t constantly shouting WRONG.

Ladies and gentlemen, you are not allowed to cry when she talks—that’s not why she’s here today. Please welcome, Hillary Rodham Beyoncé Clinton!