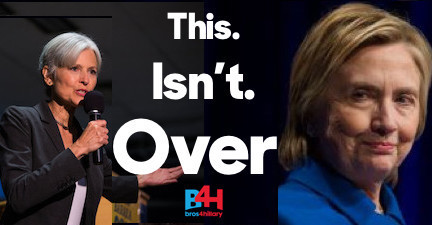 Here’s a statement on the Pennsylvania recount from Jonathan Abady, lead counsel to the Stein recount efforts, and Founding Partner of Emery Celli Brinckerhoff + Abady LLP:

“Make no mistake–the Stein campaign will continue to fight for a statewide recount in Pennsylvania. We are committed to this fight to protect the civil and voting rights of all Americans. Over the past several days, it has become clear that the barriers to verifying the vote in Pennsylvania are so pervasive and that the state court system is so ill-equipped to address this problem that we must seek federal court intervention. As a result, on Monday the Stein campaign will escalate our campaign in Pennsylvania and file for emergency relief in federal court, demanding a statewide recount on constitutional grounds.”

According to the Philadelphia Inquirer, Stein also plans to pursue the recount at the County level. The Inquirer reported that “Stein’s campaign intends to continue its county-by-county recount effort in Pennsylvania.”

This will require proponents of a recount in Pennsylvania to go back to the challenging task of having to find three voters per election district to petition for a recount. Bros4Hillary members interested in helping with that effort, particularly residents of Pennsylvania in more rural areas, may visit our article on the subject here.

Trump-backers are seeking to block the recount efforts in Wisconsin, Michigan, and Pennsylvania, according to the New York Times. Which begs the question: Why would the winner of the presidential election, who claimed both prior to and following election day that the vote was “rigged” in his opponent’s favor and that millions of “illegals” fraudulently voted for his opponent, seek to block these recount efforts at all?

Alex Mohajer is the political director of Bros4Hillary and the editor-in-chief of BrosBlog. You may e-mail him at alex@bros4hillary.com or tweet him @alexmohajer.