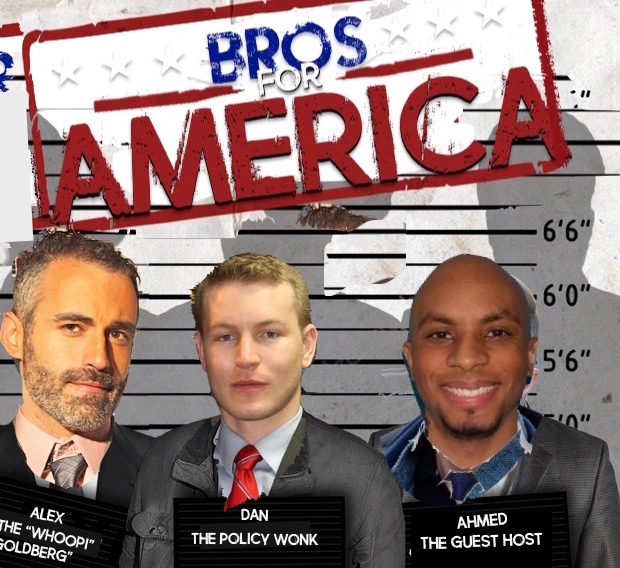 “The Secretary of State has been rendered useless. Rex Tillerson is literally just traveling around the globe giving handjobs for oil.” – Alex Mohajer, Bros for America podcast.

The conversation ranged from Kim Jong Un and the shocking announcement that Trump has agreed to meet with the North Korean dictator in May, to speculation as to whether or not the Trump Administration would need to start using Craigslist to fill vacant staffing needs in the White House as another round of high-profile exits rocked America this week.

March 13th is Bros4America co-founder Alex Mohajer‘s 33rd birthday, and all he wants for his birthday is to elect Conor Lamb to the United States Senate in the special election happening in Pennsylvania’s 18th congressional district on Tuesday. “There would be no better birthday gift this year than for Conor to pull this off on my birthday,” Mohajer said during the broadcast.

This year, Mohajer plans to protest Donald Trump, who will rear his head at a Beverly Hills fundraiser for his 2020 campaign in Los Angeles on Tuesday.

The hot topics discussion this week covered the gamut, from Jeff Session’s racism and absurd priorities as the Attorney General to Kim Jung Un’s end-game in the upcoming purported negotiations with the Bigly Negotiator himself.

Donald Trump’s top economic adviser Gary Cohn announced that he will resign, joining a growing list of high profile departures for the administration.

Second runner-up: Gary Cohn. Donald Trump’s senior economic adviser, who couldn’t be bothered to resign the Trump Administration when his boss was voicing his support for white nationalists during the Charlottesville riots last year, has reportedly reached his breaking point over Trump’s announcement regarding tax tariffs.

For the runner-up and winner of this week’s #ShitholeoftheWeek, listen now to the Bros for America podcast.