President Pelosi, If You're Nasty! 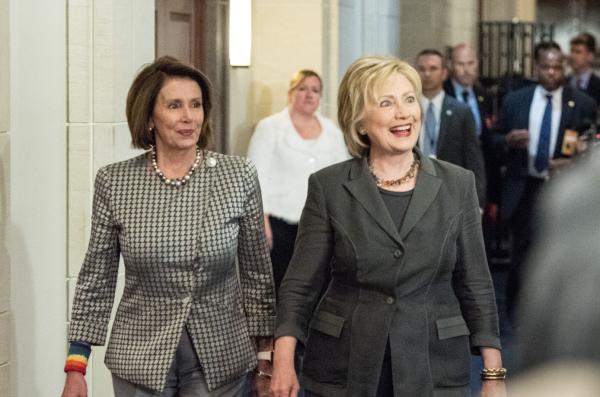 One thing is clear after the most recent episode of Bros For America, the new progressive political podcast by advocacy group Bros4America: These guys are #stillwithher. Big time. And they don’t give a f**k if you hear or care.

“The one Bernie Sanders supporter who listens to our podcast just turned it off,” quipped co-panelist Rance Collins. Collins joined moderator and Bros4America Co-founder/Editor-in-Chief Alex Mohajer, and co-panelist Thomas McAbee in offering a unanimous unofficial endorsement of and call for Hillary Clinton to run for the presidency in 2020.

“If I can’t see a President Hillary Clinton, then I’m going to see a President Nancy Pelosi,” Collins laughed, though hardly joking. Among the many potential repercussions of the forthcoming “blue wave” is a new Speaker of the House. Indeed, current House Minority Leader Nancy Pelosi (D-Calif.) is poised to retake the position, which she previously held from 2007 to 2011, once again becoming third in line to assume the presidency in the presidential line of succession should Trump and Vice President Mike Pence resign their office or be indicted with federal crimes. She will become only the second female Speaker of the House, second only to herself.

Pelosi has become the stuff of conservative lore, and few political figures are as despised as she is by the conservative, and lately progressive coalition(s).

The San Francisco liberal was the first female Speaker of the House from 2007-2011, and has been responsible for a large slate of legislative achievements. (She is considered to have played a vital role in securing the votes needed to pass the Affordable Care Act.)

Collins proceeded to egg on Bernie Sanders supporters with his pro-Clinton endorsement, joking that the Clinton love would surely scare off the sole Bros4America Barnard Sanders voters. The comment was a slight at third-party and independent voters who, since the election, have taken to criticizing long-time members of the Democratic party like Pelosi (D-Calif.) instead of directing their ire towards regressive GOP policymakers and leaders.

The unofficial Hillary endorsement should come as no surprise. Bros4America did actually begin as Bros4Hillary, after all. Nevertheless, the passage of time and growing pressure by Hillary haters to move on may have created an urgency and identity crisis in some people, here at Bros we only speak the truth:

Hillary Clinton deserves to be president, and she should run in 2020.

“I can’t believe how giddy this is making us,” Mohajer said as the mere suggestion of a Clinton 2020 run rendered the three panelists for this episode unable to make it through fits of hopeful laughter in what was meant to be a more serious breakdown of the week’s latest events and developments in the Trump/Russia story. With the House Committee’s Republican members unceremoniously and abruptly closing their investigation, and with the Trump Administration firing anyone with even a modicum of firsthand knowledge that might be used to corroborate allegations against him, the week’s bombastic events all come down to one thing.

Either way, HRC seems to be ruffling feathers. The Bros aired this following sound bite of Hillary Clinton savagely shooting down Ivanka Trump’s reported ambitions for the White House.

When asked whether Ivanka Trump will make good on her desire to become the 1st female President of the United States, Hillary Clinton did not miss a beat in this brilliant dead-pan. HRC has emerged post-election as the voice of the Resistance IMHO. Whether people admit it or not. pic.twitter.com/19hCGJoalt

SHITHOLE OF THE WEEK

#3 Omar Navaro (R)  – Republican Candidate seeking to upend Maxine Waters in CA-43 and has been endorsed by a series of real losers and creeps including white nationalists, Breitbart, etc.

Meet Omar, the blowhard alt-right white nationalist apologizer, and Republican who is running against Maxine Waters in California’s 25th Congressional district. He has taken to blasting Waters, who has been a voter favorite in calling out the Trump Administration for it’s treatment of LGBT people and its connection to the Kremlin (which she refers to as the Kremlin Klan).

Omar got into a little online spat with Bros4America co-founder and political commentator Alex Mohajer, after Mohajer just couldn’t help himself in response to a tweet the congressional candidate posted in which he seemed to relish a series of endorsements from white nationalist groups.

Hey Omar, welcome to California. We are the fucking epicenter of the resistance. Try bringing your Breitbart alt-right white nationalist bullshit here and see what happens to you (at the polls). #IStandWithMaxineWaters

The March for our Lives march and movement may very well be the student-lead and drive grassroots effort needed to stop the NRA. So it came as a bit of a surprise to see the 76-year-old Senator from Vermont wedging himself into the speaker list and trying to poach this movement as his own.

Bernie Sanders has some experience pretending that other progressive accomplishments are worth noting — but only his own. But more importantly, his record with the NRA is nothing to write home about, and his stance is one that was untested on the world and national stage and one that Democrats mostly disfavor.

On Saturday night, SNL leading lady Kate McKinnon channeled and skewered Education Secretary Betsy Davos, who has made a series of ill-advised and humiliating media appearances in the past days that has some groups speculating as to her fitness. More specifically, her statements about guns in light of recent shootings and protests sparking up around the country in pursuit of sensible gun safety legislation. Devos reportedly wants to make certain “all schools are safe learning environments for guns.”

But McKinnon says it all.

Bros For America is a podcast executive produced by Alex Mohajer and Bros4America. The panelists are Alex Mohajer, Thomas McAbee, Rance Collins, and Daniel Fusselman. Recent guest hosts have included Ahmed Baba of RANTT media. The program is edited using Audacity and created using ECamm Movie Tools for Skype. The podcast is distributed through WordPress, powered by Powerpress and Blubrry. The theme music is “It’s Always Too Late To Start” by Chris Zabriskie and special thanks are in order to Nelson Melegrito, Matt Garrett, and Hillary Clinton.