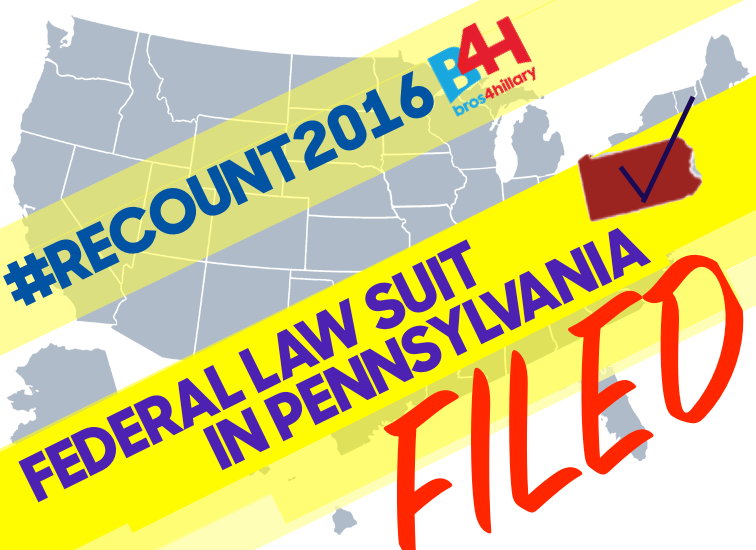 A great deal of media speculation and confusion circulated around the internet over the weekend regarding the status of recount efforts in Pennsylvania, after news of a successful maneuver by Donald Trump to block recount efforts. A few media outlets reported Dr. Stein of the Green Party, who originally sought the recount in Pennsylvania, was dropping her bid for a recount because of a $1 million bond being implemented by a judge, favoring Trump.

However, Stein publicly posted to her Facebook page that she would be escalating her efforts. As promised, she did escalate the matter from the state to the federal level late Monday when she filed an explosive law suit in federal court in Pennsylvania.

In her complaint, Stein lambasts the state’s elections, calling them a “national disgrace.” More from the complaint:

“Voters are forced to use vulnerable, hackable, antiquated technology banned in other states, then rely on the kindness of machines. There is no paper trail. Voting machines are electoral black sites: no one permits voters or candidates to examine them.”

In an act of defiance, Jill Stein held a press conference in front of Trump Towers in New York on Monday where she jabbed at Donald Trump’s peculiar requests to legally end recount efforts in Wisconsin, Pennsylvania, and Michigan. She said:

“We are here to assure Donald Trump that there is nothing to be afraid of. If you believe in democracy, if you believe in the credibility of your victory, put down your arms, end your bureaucratic obstruction.”

Bros4Hillary has been running an comprehensive update on Pennsylvania’s recount efforts here. And all of the challenges to Election 2016 in our Daily Digest.

Alex Mohajer is the political director of Bros4Hillary and editor-in-chief of BrosBlog. You may tweet him @alexmohajer or e-mail him at alex@bros4hillary.com