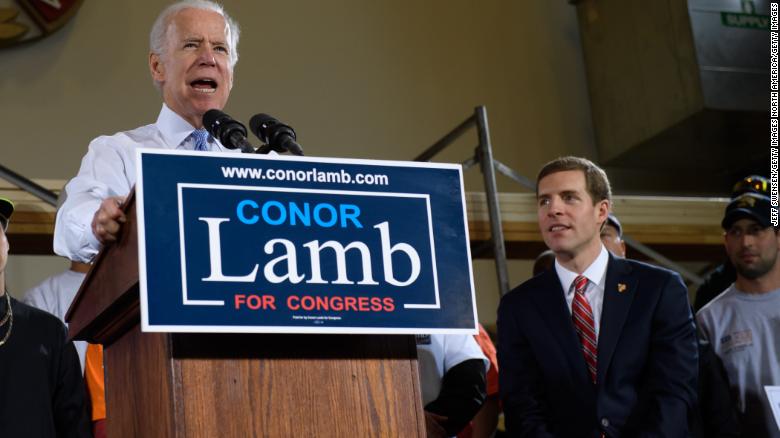 Rise and shine to the residents of Pennsylvania’s 18th Congressional District (PA-18)! It’s the day of the (special) election, y’all! Former Vice President Joe Biden has been hard at work on the campaign trail for Conor Lamb, the 33-year-old Democrat vying for the seat left vacant by Republican Tom Murphy, who resigned late last year amidst news that he had asked the woman with whom he was engaged in an extramarital affair to have an abortion, despite his past hardline anti-abortion record.

Lamb is seeking to flip this historically red seat blue in keeping with a larger national movement to unseat Republicans and a referendum on Trump.

The Cast of Characters

After being elected in 2002, Rep. Tim Murphy (R) has held this seat since 2002. He won reelection without difficulty and did not even have a challenger in 2014 and 2016. In 2017, he resigned after he was caught having an affair. Due to this district not electing a Democrat to the U.S. House and not backing a Democratic candidate for President since at least 2000, this district should have been an easy Republican hold. It is in Southwest Pennsylvania and represents right-leaning Pittsburgh suburbs and white working class (WWC) counties nearby.

With 33-year-old former prosecutor and marine Conor Lamb (D), the race is competitive. He is barely mentioning Trump but instead is running on economic issues, protecting healthcare and protecting social security. He is aiming to win over voters who are white without college degrees but have union backgrounds and may have voted Democratic a few years ago. 25% of the district’s residents are either in a union or live in a household with a union member.

Lamb’s opponent, Rick Saccone (R) is a former State Legislator. Mr. Saccone got into hot water recently when he said that the federal government could not solve the opioid crisis. He also is having trouble fundraising (Lamb raised $3.2 million in 2018 while Saccone raised only about one million) although Republican outside groups are helping him. Also, Republicans have said privately that Mr. Saccone is running a bad campaign. With that being said, they could be trying to dampen expectations.

A Referendum on Trump

Note: this race should never have been competitive

Trump won 60%-40% of the two-party vote, 91% of the residents are white, 54%-55% of the residents are white without college degrees (Trump’s best demographic) and the Democrats did not even field a challenger in 2014 and 2016. The Republican candidate running Rick Saccone (R) is also not a “Roy Moore type” with a major scandal which makes the race’s competitiveness an even stronger sign about Democratic chances in the midterms. Trump also campaigned here and announced his tariff plans which may work for him here.  Even if Conor Lamb (D) narrowly loses, this is a victory for Democrats. It shows that if we can come close in a district Trump won by 20, we can compete and win in seats Trump won by 10%-15%.<

Trump won the two-party vote 60%-40% in this district, Romney won the two-party vote 59%-41%. Despite what some have said, this is not a Democratic district. No Democratic Presidential candidate this century has won it. Compared to other districts in the region, this district did not shift as far right as the others, however. 36% of the district’s residents who are 25 and older are college educated. While 57% of the district’s votes are cast in predominantly WWC counties, 43% are cast in Allegheny County (Pittsburgh). PA-18 represents part of suburban Pittsburgh and there are many college educated voters here.

This race can also be an indicator of two of the Democratic Party’s paths to regaining the House.

Allegheny County: Lamb 57%-43%.  43% of expected votes to be cast here. Democrats have opportunities in congressional districts in suburban Orange County, suburban Houston, suburban Dallas and suburban New Jersey. All of those districts are in well-educated areas that are historically Republican but shifted left in 2016. Allegheny County is a similar area. It voted 54%-46% Romney in the two-party vote but 52%-48% Trump. This part of the district is a bedroom community for Pittsburgh and many of the wealthier and more well-educated commuters live here. Bethel Park is a well-known one.

Greene County: Lamb 42%-58%. 2% of expected votes to be cast here. While this county is only 2% of the population, it is an example of an area Trump overperformed. While Obama lost the PA-18 part of the county 62%-37%, it is very WWC with only 17% of the adults being college educated and Trump won it 70%-27%. As recently as 2014, Governor Tom Wolf (D) won the PA-18 portion of the county and in 2016, the Democratic candidate for State Treasurer lost it in the single digits (on the same ballot where Trump won it by over 40 points).

Coal mines have closed here and the population is shrinking. This county voted for Al Gore by 10, it has shifted over 50 points in Presidential races in 16 years. Lamb can win the district without winning this county but he needs to hit the low 40s. Obama in 2008 and 2012 won few areas like Greene County but he won by running up margins in urban areas and losing areas such as Green County by 55%-45% or even 60%-40%, not 70%-30%. Lamb needs to do the same.

<>Washington County: Lamb 47%-53%. 22% of expected votes to be cast here. Washington County is a less Republican and more populated county than Greene County is. While there are a few suburban residents here, it is predominately WWC. With many of the similar former union voters who are Obama/Trump or Kerry/Trump (Kerry was the last Presidential Democrat to win the county), Lamb needs to use his message of standing up for healthcare and opioid treatment to work here. This is where the voters with union backgrounds live. Lamb does not need to win Washington County but he needs to lose by six or less.

Westmoreland County: Lamb 43%-57%. 33% of expected votes to be cast here. While this area is suburban Pittsburgh, it is much more WWC than the Allegheny County portion of the district. Since 1992, the Republican percentage of the vote in this county has increased in every successive Presidential election. There are voters here with union backgrounds but the presence is less pronounced than in Washington and Greene Counties.

In conclusion, for Lamb to win, ask these three questions:

But a win here will show that Democrats are not only matching and/or running narrowly ahead of Obama 2012 in the rural areas and Clinton 2016 in the suburbs (a combination to take the House back narrowly), they are outrunning both dramatically and are in a great position for November 6, 2018.

The data used for this piece was gathered from Daily Kos – Elections.