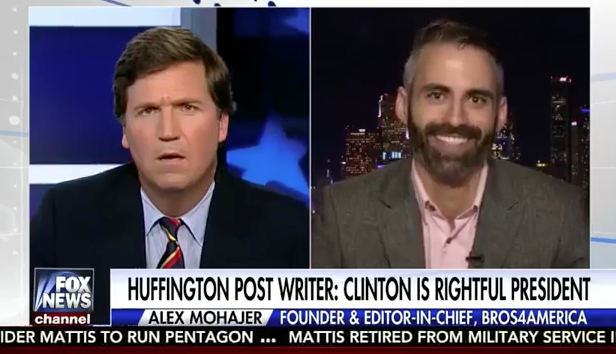 It’s a rare sight, but Political Writer and Commentator and Bros4America Co-Founder Alex Mohajer managed to wipe the grin off FOX News Host Tucker Carlson’s face in 3 seconds flat during their live interview on Wednesday. Live with Carlson to discuss his Huffington Post piece “The Legitimate President.” When Carlson tried to pull a fast one on Mohajer and serve his token “gotcha” moment, Mohajer wouldn’t have any of it. He flipped the tables and full on called out Carlson out for his hypocrisy, referencing his time with “The Daily Caller,” a news publication known to have published racist contents to people. Tucker is left spinning and hilariously off his guard, struggling to regain composure, so Mohajer doubled down and had at him again, pondering openly, “are you a legitimate journalist?!” Carlson was fuming. And we were delighted!