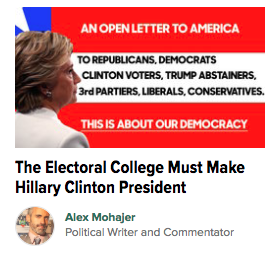 The Huffington Post has picked up a version of our ‘Open Letter to America’ in which we call on the Electoral College to cast their votes for Hillary Clinton. The letter was written by Bros4Hillary Political Director, Alex Mohajer. Mohajer is the Co-Founder of Bros4America, the new spin-off organization succeeding Bros4Hillary in January 2017. He is also a contributing political writer and commentator for the Huffington Post.

There are only 5 days left until members of the Electoral College cast their votes for President on December 19, 2016. The Hill is reporting that 40 electors are asking to receive intelligence briefings on the extent of Russian interference.

37 electors are needed to flip the Electoral College and deny Donald Trump the presidency.