On The Second Day of Hillary: Be Stronger Together 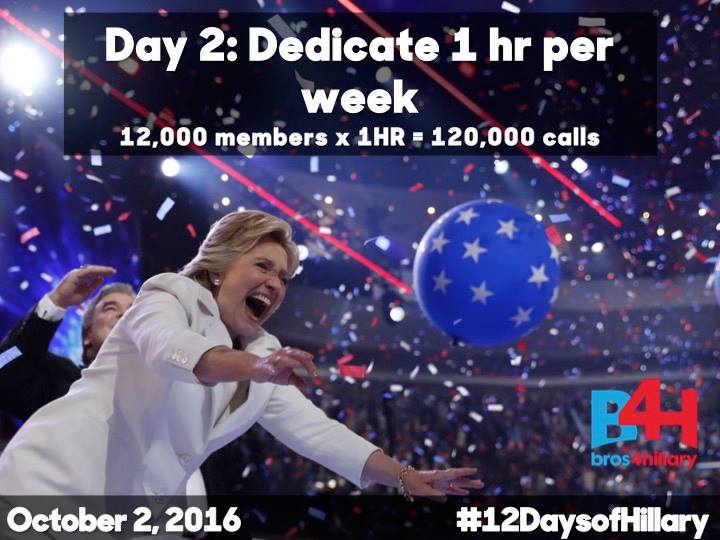 The #12DaysofHillary are officially underway, and yesterday we spread the word across the social media scape about the urgent need for campaign volunteers to MAKE CALLS.

On Day 2, we are asking our members to think of the enormous impact we could have if we banded together to make calls. One person making calls makes a little dent. 29,000 members and followers across our various social media platforms making calls makes an enormous and impactful splash.

So Bros: On the Second Day of Hillary, we are asking that from now until election day, that each and everyone of you dedicate one hour per week to elect Hillary Clinton.

Why? Because the proof is in the numbers:

13,000 members dedicating 1 hour per week to make calls equals 120,000 calls made for Hillary across the United States in ONE WEEK!

No matter how you decide you will dedicate your one hour of weekly volunteering, just remember that today’s theme is about #StrengthInNumbers. If you alone make one hour of calls this week, the total net positive effect on the Hillary Clinton campaign is not that substantial. But when all of you put your minds together…you are #StrongerTogether. So reach out to your friends, family, and fellow Bros4Hillary members, and encourage them to join you on this effort!

Volunteering is so important. Every person you call is another person who may not have heard from the campaign. You can do it from anywhere! The gym, the comforts of your own home, while working on your tan lines, and even in certain prisons.

Stay tuned for The Third Day of Hillary, tomorrow!

Alex Mohajer is the Political Director of Bros4Hillary. You may reach him directly here.  The #12DaysofHillary memes were designed by Bros4Hillary’s Social Media Outreach Team Leader, Priscilla Wagner. You may tweet her at @_CillaW.