On the Ninth Day of Hillary: Publicly Declare Your Love 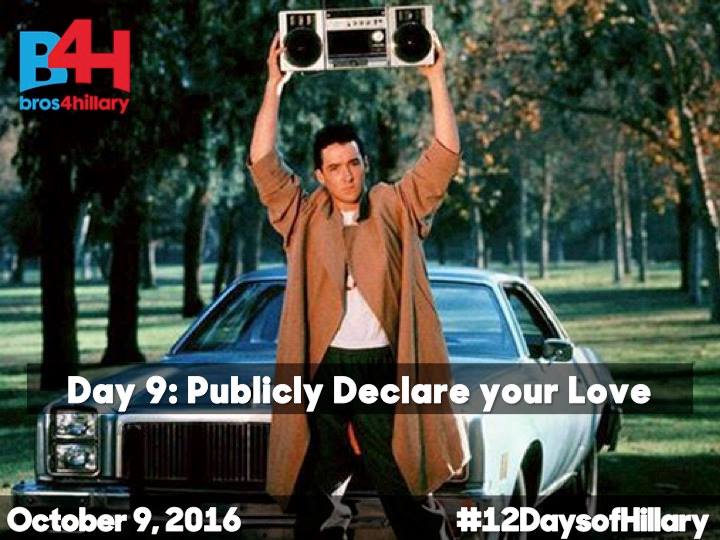 The #12DaysofHillary continue. And it is fitting that the ninth day should fall on the same day as the second presidential debate. Today, we are asking you to publicly declare your love for Hillary Clinton. Show her you support her. Show her you’re not just against Donald Trump. But you’re for and with her.

Tonight is going to be a real test of the Clinton campaigns ability to deal the final blow. And also, may get ugly. Donald Trump has already projected his intention of going after Bill Clinton’s infidelities in prime time tonight. It is a tactic that is beneath all of us and certainly below Secretary Clinton. And yet, she will again be asked to relive these events tonight so that her opponent may exploit an painful part of her past to defend against his current scandal.

We have heard a lot over the previous 48 hours about all the reasons to vote against the Republican nominee. But in the midst of this massive and sudden response to denounce Donald Trump, the narrative has shifted to one that paints the race as housings two unlikeable candidates, with one now being too detestable to bear.

The truth is that Secretary Clinton’s supporters have consistently polled as being enthusiastically behind her. This is not a supporter base that is tepid in nature. They’ve raised record amounts of campaign funds in the past year and demonstrated a zeal and passion that is sometimes overshadowed by the prevalent media narrative.

That’s why today, on the #9thDayofHillary, we are asking you to publicly declare your love.

Stay tuned for The Tenth Day of Hillary, tomorrow!