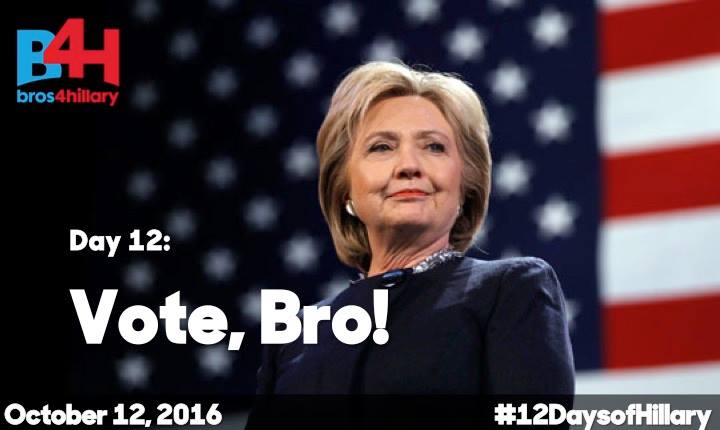 The #12DaysofHillary are coming to a close today. It has been a pleasure working on this mini-campaign to try and reach as many potential and swing state voters as we could.

On the final day of our little stunt, we want to just encourage you all to get out there and actually vote. All of this effort registering voters and going through this tumultuous election season will be all for naught if people assume that a victory is clinched or that their vote doesn’t matter…and that they can stay home.

There is a huge concern that millennials will not get out to the polls, either because of apathy or because they assume Hillary has this in the bag. But if enough people subscribe to that notion, then the whole premise is turned on its head. As a millennial myself, I can tell you that most of our executive board and a majority of our 30,000 members and followers are millennials. We care. And you need look no further than right here to see that the “enthusiasm gap” so thoroughly described by the media to describe Hillary Clinton’s weaknesses is a myth.

But we have to get out there and VOTE. Let’s show the world that we will carry Hillary the way we did Obama. Let’s make history.

Early voting started today in Ohio. Get out there and vote, Bro. What would LeBron James do? Well, he endorsed Hillary. So Ohioans…get out there today and VOTE.

If you haven’t registered yet: www.iwillvote.com/Bros4Hillary

So make your voice heard. We here at Bros4Hillary have been working so hard day in and day out since January boost voter participation and engagement, and to boost registration and reach swing state voters with phone calls. We hope that you will join us in helping elect Hillary Rodham Clinton the next President of the United States.

I want to thank our invaluable Social Media Outreach Team, particularly our SMOT Team Leader Priscilla Wagner, who designed all of the memes for the #12DaysofHillary. I also want to thank Katharine Rose, our Political Researcher, who researched all of the voter registration deadlines and early voting periods and created swing state voter registration memes that we have been distributing throughout the 12 Days. Thanks for being invaluable assets to our team.

Stay tuned to Bros4Hillary! We have even more exciting things coming up in the final 27 days of this campaign, including more exclusive content from our partnership with Hillary for America. Tweet us @bros4hillary, shoot us an e-mail at bros4hillary@gmail.com or join our Facebook group (where it all started) at http://www.fb.com/groups/bros4hillary.

Alex Mohajer is the Political Director of Bros4Hillary and serves as the Editor-in-Chief of the BrosBlog. You may contact him directly here.  Priscilla Wagner is the SMOT Team Leader and you may tweet her @_CillaW.