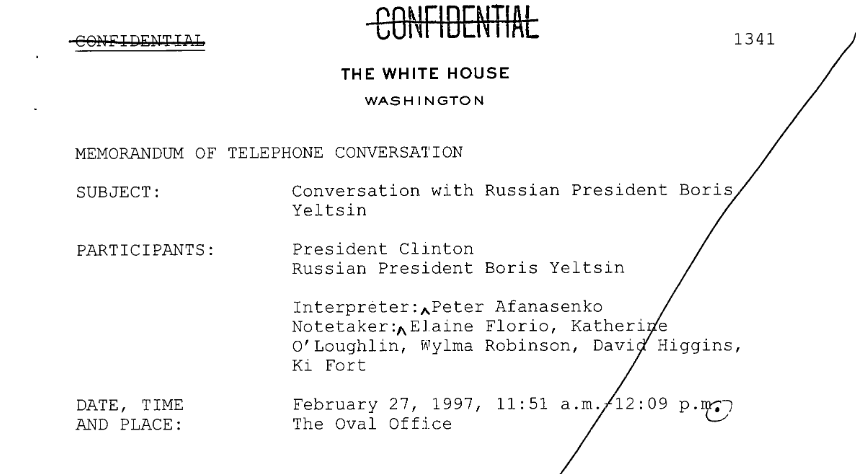 While Bill and Hillary Clinton made waves Friday at the much-ballyhooed funeral of late singer and music icon Aretha Franklin, the National Security Council and Clinton Library silently declassified and released 591 pages of previously classified documents concerning the Clinton Administration’s conversations and dealings with then-Russian President Boris Yeltsin in the 1990s. The documents, which can be viewed now online, include transcripts of secret phone conversations between Yeltsin and Clinton.

The documents include conversations and transcripts that occurred exclusively between President Bill Clinton and Yeltsin, and reveal a fascinating glimpse into American diplomatic efforts with Russia throughout the 1990s. With subjects ranging from Ukraine, to the nuclear weapons, and the wrongdoing of Russian oligarchs, the release is proving poignant and timely despite being decades old, as the current Trump Administration falls under increased scrutiny for their ties to the Kremlin and its associates.

In addition to Manafort and Cohen, Trump’s Deputy Campaign Manager, National Security Adviser Mike Flynn, and a foreign policy aide to his campaign have all admitted crimes or been convicted stemming from Mueller’s investigation. 13 Russian Nationals have been charged, though there seems to be intense criticism to conclude the investigation by Mr. Trump and his current counsel, former New York mayor Rudy Giuliani, Special Counsel Robert Mueller’s investigation seems to be just getting heate