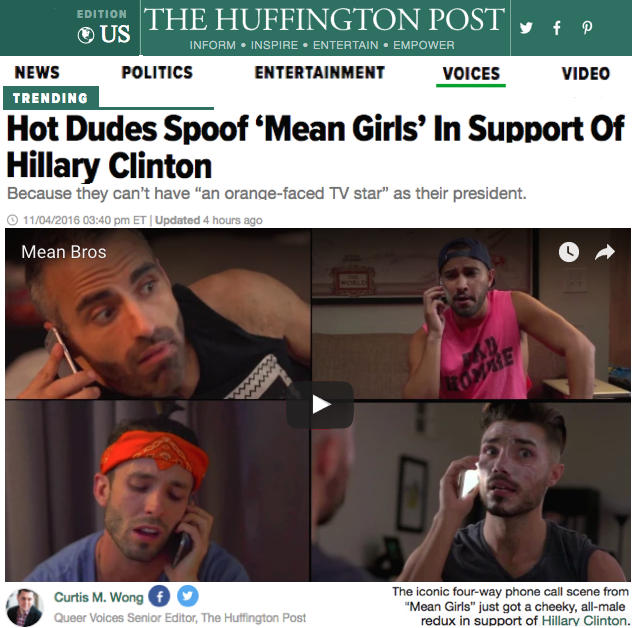 Bros4Hillary was featured on The Huffington Post today in a feature written by Curtis Wong. The article talks about “Mean Bros,” our short film/parody spoof of “Mean Girls.”  The writer interviewed our very own political director, Alex Mohajer, who co-produced and co-wrote the video, and gives Bros4Hillary some major love.

Mohajer, who is Bros4Hillary’s political director, told The Huffington Post that he and his writing partner Daniel Fusselman aimed to create a “funny and buzzworthy” video that reminded voters that like Regina George, a Donald Trump presidency could ruin people’s lives.

“I’m a millennial… and LGBT, [and] I was particularly miffed at being told my demo didn’t support her,” Mohajer, who is a government advocate by day, said. “Phone banking has been a central focus of our partnership with Hillary for America, and the idea to do a spoof of the phone call scene in ‘Mean Girls’ just sort of organically popped up in creative conversations.”

Check out the article and interview here. We also received features from Instinct Magazine and OUT Magazine as well the popular blog Towleroad.

Have you seen Mean Bros yet? We are viral across YouTube, Vimeo, and Facebook. Check it out at www.bros4hillary.com/meanbros.

There are only 2 days left in this campaign. Mean Bros is all about phone banking. Don’t let the opportunity to participate

in this election pass you by. Did you do everything you could to make sure we elect Hillary Clinton the next President of the United States? Will you be able to live with yourself if Donald Trump is elected? Will you feel the pangs of guilt?

Our members are competing nationally to make the most calls in America for Hillary Clinton. Our latest numbers have us in fifth place in the COUNTRY.

Alex Mohajer is the political director of Bros4Hillary and the Editor-in-Chief of BrosBlog. He co-produced, co-wrote, and starred in Mean Bros.

Nelson Melegrito is the founder of Bros4Hillary. You may contact him or Alex Mohajer at bros4hillary@gmail.com.