How Did They Vote? Senate Confirms Gorsuch to Supreme Court 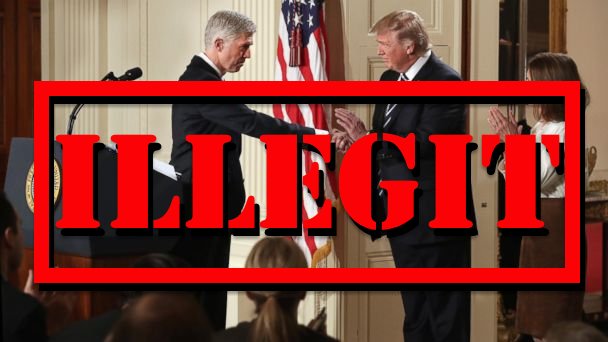 An abhorrent and historic affront to our democracy that must not be forgotten. Ignoring the nomination of Merrick Garland to the Supreme Court by former president Barack Obama, the United State Senate has voted to confirm Neil Gorsuch to a lifetime appointment on the Supreme Court, and this morning he was sworn in. Media outlets are reporting that the swearing in represents an end to a 14-month feud over the position, which has been left empty as a result of Republican efforts to stall the nomination and confirmation process until such time that Obama left office. Nevertheless, many believe that Garland, who was nominated by Obama a year before the end of his term, should have received at the very least an up or down vote.

On top of that, Mr. Trump is under active FBI investigation for potential collusion with the Russian government to coordinate a massive act of cyber warfare meant to influence and interfere with our presidential election. If evidence comes to fore that suggests Trump colluded, all of his appointments, including SCOTUS, would also be rendered illegitimate.

Here are the United States Senators who voted to confirm and to deny confirmation to Mr. Gorsuch. Primary them. Defeat them. Resist.