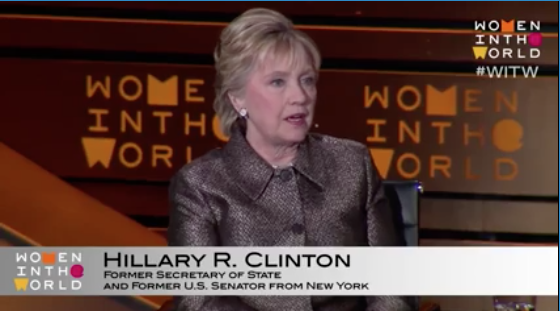 In her most candid remarks about the election to date, former presidential candidate Hillary Rodham Clinton, the first female major-party nominee for the position in American history, spoke openly and at length yesterday in New York City at the Women of the World Summit. Calling the experience “devastating,” Clinton cited misogyny and Russian interference as major reasons for her loss, with a cautiously placed side-eye for FBI Director James Comey and WikiLeaks.

Her nearly hour long interview at the women’s empowerment conference had the former Secretary of State, Senator, and First Lady of the United States speaking to the New York Times about her hurts, her hopes, and her assessments arising from the election, a subject she said is the basis for a new book she is authoring meant to provide her own unique perspective of the event.

Clinton, who seemed liberated by the loss and yet at times visibly angry, was most compelling when offering her sharp criticisms of the new administration, particularly Donald Trump’s handling of the health care bill, the “muslim ban,” and the targeting of women. Speaking about misogyny with a certain freedom surely afforded to her by virtue of the fact that she is no longer campaigning, Clinton was in rare form, very clearly comfortable assuming the role of watchdog without a personal stake in the game.

Still, when asked simply how she is doing. Clinton’s answer, surely off the cuff, was a painful subliminal reminder of the role women are still expected to play in our society, no matter what the arena. “I’m ok. As a person. But as an American, I’m pretty worried. So it’s time to take my person hat off and my citizen hat on.”

Another particularly noteworthy moment came around the 27:40 mark, when Clinton gets riled up, visibly angry discussing Russian bots and trolls and their interference with the election. “They want to crush your spirit,” Clinton said, continuing on that the trolls seek to strip you of your belief in yourself. “And I just refused to do that, which infuriated them even more.”

Hillary Clinton won 3 million more votes than her Republican challenger in the 2016 presidential election, and won more votes than any other candidate in history, second only to Barack Obama, whose 2012 total she tied.