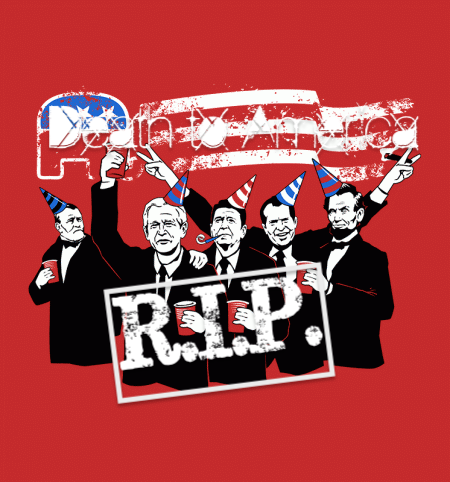 As Donald Trump’s onslaught of daily scandal and spectacle grows to a nearly-comedic fever pitch, the Republican Party, whether it be members of Congress or the apparently state-owned media network that continues to prop them up, continues to demonstrate a total unwillingness or desire to end this madness.

Indeed, the majority party is the Republican Party, and they control each and every facet of the government. Whether through gerrymandering or the disqualifying of millions of legal voters from the voter rolls, or the disenfranchisement of hundreds of thousands of African American voters, or stealing a seat on the United States Supreme Court, the Republican Party has all the power.

Still, even if obtained through shenanigans, crime, and illegality, the idea that the Republican Party didn’t love America was once outlandish. Think what you may of George W. Bush (I was known to call him a war criminal while protesting his administration in the early 2000s), one never questioned his patriotism, at least not really.

That Republicans have been embedded by special interests is not news. That has been the reality for decades. But this is something new. Donald Trump is not a Republican. And he is slowly and surely tearing apart every Democratic institution and ally. And regardless of how they got there, a patriotic Republican Party who puts Country before party would end this sideshow spectacle and impeach this threat to our Democracy.

But they allow it. Day in. Day out. And with the recent Trump “Treason Summit” in Helsinki solidifying for the left what they feared all along– that the President of the United States is owned and working in concert with the worlds leading foreign hostile power– and Trump’s sexual abuse allegations piling on, and of course reports that his former private attorney Michael Cohen is in possession of damning audio tapes from 2016….only one question remains.

Will the Republican Party do what’s right?

The answer is simply, no.

The Bros for America podcast is executive produced by Alex Mohajer and co-hosted by Alex Mohajer, Daniel Fusselman, Thomas McAbee, and Rance Collins. It features the music “Operatic 3” by Vibe Mountain and “It’s Always Too Late To Start Over” by Chris Zabriskie. Insterstitial music is Howard Beal’s House of Cards theme. Bros for America is produced using Audacity and powered by Bluberry/Power Press.