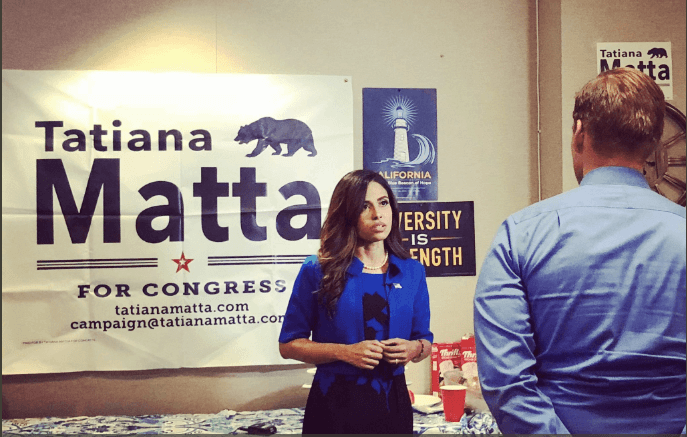 Tatiana Matta is the Democratic candidate for Congress in California's 23rd Congressional district. She is apart of the class of women seeking to flip the Congress blue in this November's mid-term elections. (Photograph Courtesy of OpsLns)

House Majority Leader and Donald Trump’s most trusted ally in Congress Kevin McCarthy has a big problem. Her name is Tatiana Matta. She is the Democrat seeking to unseat McCarthy in California’s 23rd congressional district, and she sat down for an exclusive interview with the Bros for America panelists as a part of our Race for 2018 interview series, which has put the spotlight on women in congressional races.

Tatiana Matta (D-CA), first-time candidate for Congress in CA-23, says that deciding to run for office was a family decision. She is a proud military mom pictured here with her husband and son. Photograph courtesy of Hanna Grace Photography.

Comparison chart in voter turn-out by district in 2014 and 2018 primary elections in California.

Matta emerged the victor among a crop of fine Democratic candidates who ran in the district in the June 2018 California statewide primaries a few weeks ago. In her district alone, voter turnout among Democrats increased by 11,000% from the 2014 Democratic primaries in California. That’s a massive haul.

Still, this is a District so firmly held by Republicans (perhaps the most conservative in the entire state) that a serious Democratic challenger in the area is rare. McCarthy is also a prolific fundraiser for the Republican Party, with a majority — yes over HALF — of his donations coming from unaccountable dark money (the “other” option), and from the verifiable sources, the majority of donations are coming from Securities and Investment firms, insurance companies, big oil and gas companies.

Matta is, by comparison, running a grassroots campaign and doesn’t have the kind of money McCarthy does. Will she benefit from the same grass-roots activism that elevated Conor Lamb to an unlikely victory in Pennsylvania, or Doug Jones to a win in Alabama? After all, 40 seats have flipped from Republicans to Democrats in just the INTERIM between the 2016 presidential election and the 2018 midterms this November.

Matta acknowledges McCarthy’s flaws are many.

“Where do I begin?” she answered when asked about the problems McCarthy poses to her district.

But Matta doesn’t care to push a negative campaign against McCarthy. Instead, she set out on a sort of listening tour around her district to find out what voters are feeling and to gauge their wants and needs.  The response?

Matta espouses a rather noble and humble view on public service and helping her community. Yes, it is problematic that Kevin McCarthy “has the ear of the president,” as she puts it and yet has brought no calm or reason to Washington. But, she would like to run on issues and would rather we send someone to Congress in the district who is an actual voice for and of the people, not one that is bought and paid for or serves merely at the pleasure of the president.

Certainly, not a candidate that will take office and cement legal authority that makes the Executive Branch of government impenetrable by law enforcement.

McCarthy has been a Republican heavy-hitter on the rise ever since he was elected to the House Leadership position in 2014 following the resignation of former Congressman Eric Cantor. McCarthy has publicly had his sights set on the House Speakership since 2015, where an initial run for the position was stymied by rumors of an affair that sidelined him in favor of current Speaker Paul Ryan.

Now, with Ryan retiring by the end of the year, the position is prime for McCarthy in a Republican Party in a deep state of turmoil, but that nevertheless maintains control. That is, of course, until November. It’s fitting that McCarthy, who has been called Trump’s closest ally in Congress, is being challenged by someone who captures everything the president seems to work actively against: a latina, a millennial, a Democrat, a woman, a military mom, a Californian, an American.

If elected, Matta will join the congressional delegation from California, which has made stars out of Reps. Ted Lieu, Adam Schiff, Nancy Pelosi, Maxine Waters, and others in a state whose judges are consistently holding Trump accountable, and whose journalists lead the charge for the resistance.

As for Matta? The future Congresswoman is ready for the fight, but she’s in it for one reason: to fight for the people.

Interested in volunteering or donating to Tatiana Matta’s campaign? Visit her on the web at www.tatianamatta.com or tweet her @Matta4Congress. The Matta campaign needs phone-bankers and volunteers!

The Bros4America Podcast is executive produced by Alex Mohajer and co-hosted by Mohajer, Thomas McAbee, Rance Collins, and Daniel Fusselman. The theme music is Operation 3 by Vibe Mountain, and closing credits “It’s Always Too Late to Start Over” by Chris Zabriskie. Special thanks to Nelson Melegrito, Matt Garrett, and Hillary Clinton.

If you love Bros4America, please consider donating to help us cover our overhead costs and expenses. We are an all-volunteer basis and all our costs come out of pocket.