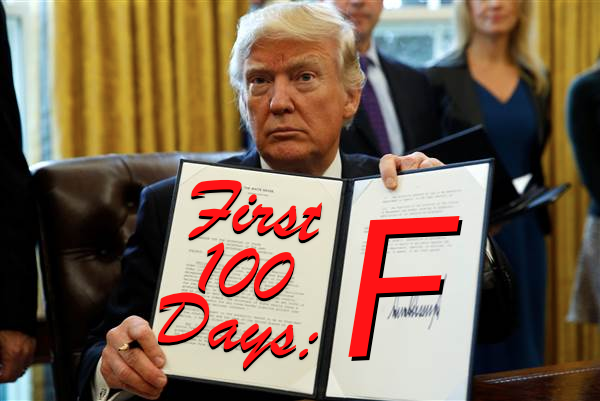 Donald Trump is rapidly approaching his 100th day in the White House, and a NBC News/WSJ poll released Sunday morning revealed his approval rating has plummeted to a historically low 40 percent, the lowest for a sitting American president since polls began tracking such data.

Mr. Trump’s approval rating has dropped 4 points since February, which had already demonstrated that a plurality of Americans do not approve of him. Nevertheless, the new poll reflects a stunning two-thirds of respondents rating his performance in the first 100 days as ‘poor’ or ‘middling.’

By comparison, former president Barack Obama enjoyed a 61 percent approval rating at this point in his presidency in late April 2009.

In 95 days, the Trump Administration has achieved no legislative achievements and fulfilled none of the legislative agenda set forth in his 100-day plan last October. He has spent 33 of those 95 days on Trump-branded properties and spent 14 days golfing, despite his regular criticisms of the former president for participating in the very same activity. (Note: Barack Obama did not play a round of golf until late April 2009 in his first 100 days in office).

Despite his promise to “drain the swamp,” Mr. Trump’s cabinet appointments seemed to invigorate it, with major appointments made to four former-employees of Goldman Sachs, alleged racists, and of course, Steve Bannon. Trump’s promise to appoint a Supreme Court justice with conservative values was honored, even as many consider Justice Neil Gorsuch to be illegitimately appointed. Gorsuch’s confirmation required Republicans in the United States Senate to change 200-year-old parliamentary rules.

In recent days, Counselor to the President Kellyanne Conway has gone on record touting Mr. Trump’ performance by pointing to passage of numerous executive orders and presidential memoranda, although several of them have been extraordinarily controversial, including the now-infamous “Muslim ban” as well as an order to crack down on “sanctuary cities” nationwide. Both orders have been challenged as unconstitutional.

The most notable among Trump’s list of failed or botched campaign promises: repealing and replacing Obamacare, punishing businesses for moving factories outside to foreign countries, and of course, the “bigly” border wall to run along the America border with Mexico.

The administration has been plagued by a great deal of controversy, with intensifying details emerging regarding Russian interference in the 2016 presidential election causing some to speculate that we are nearing a ‘constitutional crisis.’ Some legal scholars have filed suit against Mr. Trump in federal court over his potential violation of the Constitution’s emoluments clause, while critics have continuously pointed out that his frequent hosting of foreign dignitaries and officials at his Mar-a-Lago estate in Florida is a conflict of interest and a national security risk.

Other particularly provocative, controversial, or botched moves by the White House in the first 100 days have included:

In recent days, Trump has scoffed at and attempted to downplay the importance of the first 100 days in the White House, though he has simultaneously made rapid and frequent attempts to maximize the appearance of his administration’s success.

At least one Congressperson, the inimitable Rep. Maxine Waters (D-Calif.) has called for Donald Trump’s impeachment, something Bros4America has been calling for since well before his inauguration.