Donald Trump is an Imminent Threat to American Democracy 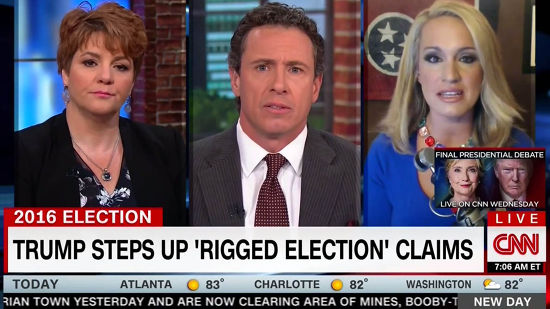 Over the weekend, Donald Trump went from scary and potentially dangerous to an imminent threat against American democracy in a single speech. In what began as a series of tweets last Saturday and has since become a full-fledged theme of his campaign, Donald Trump has publicly declared that this election is “100% rigged,” a by-product of an elaborate collusion between the Clinton campaign and the media.

In doing so, Donald Trump, the Republican nominee for president, has called into question the integrity of the American Democratic process. I realize many of you probably digested that as more of the same old rhetoric that we have been getting for almost 15 months. We have all grown sort of numb and unaffected by this rhetoric. This is not like everything before. This is different.

A statement of that magnitude has NEVER been stated, by a major party candidate, in our country’s history.

Our democratic process and electoral system are held in the highest esteem by virtually every elected official in our country, Republicans and Democrats alike.

Today, more than ever, I have a great deal of respect for Speaker Paul Ryan. His swift and stern denouncement of Trump’s allegations were not only welcome, but they were appreciated.

I do not dismiss the notion that our two-party system is fraught with problems. That goes without question. However, calling into question and undermining public faith and confidence in our electoral system in unmerited and false accusations is an affront to the legitimacy of this government and our forefathers.

If you have grown tired and weary of this election, I understand. If you are worn out with the scorched earth themes that it appears we are destined for over the next three weeks, I understand.

If you are female, African-American, Latino, Asian-American, foreign-born, Muslim, gay, transgender, or hell, a decent human being, you CAN NOT sit out this election. This not the election to voice your libertarianism or to protest the two-party system, or to write-in your opposition candidate.

If you have reservations about Hillary, that is fine. When the threat to American Democracy has been defeated, make sure to hold her accountable. If you are willing to risk “burning it down” by voting in protest or not voting at all, don’t complain when a figure of speech becomes a reality. This year, the choice is Hillary or Trump. There is no viable third party candidate.

You need to go vote. Vote by mail, vote early in person, secure an absentee ballot, or simply show up to a ballot box on November 8th, because I guarantee you one thing: Every person that thinks America needs to be made great again will be there. And the question of what period of time Donald Trump proposes we return to so as to restore our greatness is one that has gone unanswered.

Justin Aron is a college sports professional living in Oakland, CA. He is an avid Supreme Court follower (outside of election season).