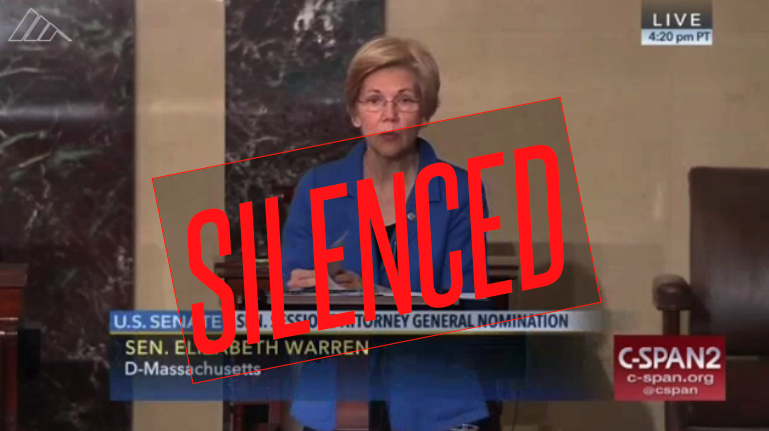 Senate Majority Leader Mitch McConnell used a parliamentary rule to silence Senator Elizabeth Warren (D-Ma) from reading a letter written in 1986 by Coretta Scott King to the United States Senate regarding Jeff Sessions, who was DENIED confirmation for a federal judge position in the 1980s based on his civil rights record. Warren was reading the letter as a way of speaking out against Donald Trump’s nominee for Attorney General, Jeff Sessions, whose confirmation vote before the United States Senate, takes place tomorrow.

The letter to which Mitch McConnell objected can be found below.

This is the 1986 letter to Congress by #CorettaScottKing re @JeffSessions silenced tonight by @SenateGOP & @SenateMajLdr McConnell. Shameful pic.twitter.com/PQAhhRWfms

The full video depicts Warren inquiring as to how it is possible that she not be allowed to read a letter that has already been admitted to the record in a previous confirmation hearing. You can watch it below.

Indeed, the letter that McConnell objected to was written by Coretta The Senate will vote on Sessions’ confirmation tomorrow. For the second consecutive night, Senate Democrats are holding the floor in the U.S. Senate in opposition to the controversial nominee, who has had a dubious record with civil rights issues.

Warren, attempting to speak using a passage by Coretta Scott King, a civil rights leader and wife of Martin Luther King Jr., was silenced using Senate Rule 19. This rule from the chamber’s guidelines preclude senators from “directly or indirectly, by any form of words impute to another Senator or to other Senators any conduct or motive unworthy or unbecoming a Senator.”

As a result, Warren will be prohibited from speaking from the floor of the Senate until after debate on Jeff Sessions’s nomination for Attorney General have concluded.