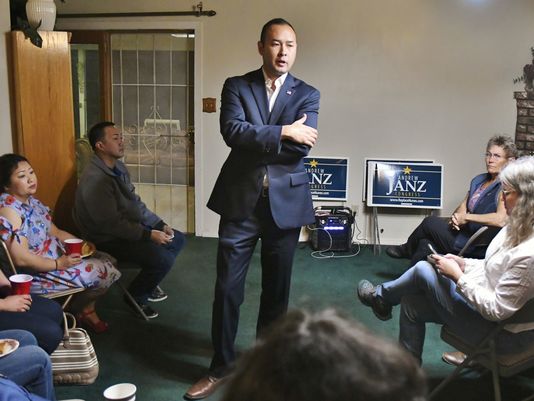 Andrew Janz is a firebrand.

Since he first announced just over a year ago that he would be challenging embattled House Intel Chair and Trump lackey Rep. Devin Nunes (R-CA) as a Democrat in California’s 22nd Congressional District in the midterm elections this November, Janz has been making a splash.

“Many said this was an impossible district [for Democrats],” Janz told Bros4AMerica co-founder Alex Mohajer and co-host Daniel Fusselman in an interview for the Bros for America podcast. “But if there’s one thing I want your listeners to take away from this, it’s that we can win this seat. We must win this seat.”

Why? Janz views the incumbent as a “danger” and a national security threat. His explosive criticisms of Nunes aren’t unwarranted. The relatively unknown Congressman rose to national recognition as the House Intel Chairman overseeing the Russia investigation. Last April, Nunes became the subject of a House Committee on Ethics investigation into allegations that ‘he may have made unauthorized disclosures of classified information, in violation of House Rules, law, regulations or other standards of conduct.’

Nunes served on Trump’s presidential transition team in 2016. He is an overall toad.

There is also a reason that Janz, a Deputy District Attorney with the Fresno County District Attorney’s office has taken in over $1 million in the first 90 days of 2018 without taking any corporate PAC money and as a Democrat in one of California’s most conservative congressional districts. Short answer: Janz is savage in his criticisms of Nunes, and he is a relentless advocate for his constituents.

From the outset of his campaign, Janz has needled and trolled Nunes for his relationship with Donald Trump and his connection to the Trump/Russia scandal, among other failures. He put up a billboard in his district mocking Nunes and his connection to Trump/Russia, and even had releasethememo.com forward to his campaign website when Nunes pulled a stunt earlier this year with hashtag #releasethememo.

A billboard paid for my Andrew Janz for Congress appeared in the 22nd congressional district here in Caifornia dragging Rep. Devin Nunes for his allegiance to Trump despite the Russian connection.

And he didn’t hold back while talking to Bros4America during this week’s podcast.

“I can tell you with a straight face that not a lot of people are fans of [Devin Nunes].” – Andrew Janz, Democratic candidate for Congress.

“He’s a ‘low-key’ member of Congress,” Janz continued. “[He has] been in office for 15 years, 8 terms, and done little or nothing for the district. He’s in Washington defending his own political agenda, defending the President of the United States…”

Janz is not afraid of a fight, and his experience as a prosecutor makes him well-suited to take this fight straight to the Capitol. His views about the president are tempered, but forceful. As “impeachment buzz” continues to make its way through Washington, Janz relies on fact-oriented analysis of the situation and supports (and indicates he will rely on) the findings of Special Counsel Robert Mueller. Like any steadfast prosecutor, Janz appears dedicated to the rule of law.

Janz says that, like Conor Lamb, he’s overcoming the disadvantage of running in such a deep red district by running on local issues and being competitive on the issues that matter to the people that live there.

“All politics is local,” Janz said during the interview. “I’m someone who actually grew up in this district, it’s my home. And I share a lot of the values of this community, both Republican and Democrat….We’re really talking about issues locally or in a bipartisan way.”

Co-host Alex Mohajer asked whether Janz would support the impeachment of the president in the event that he fires Special Counsel Robert Mueller, an act that insiders have been speculated is on the table for Trump, but that political scientists and commentators opine that, without a response, would deal a fatal blow to our democracy.

Janz did not hesitate to agree to such a pledge, and had this message to Republicans who try to shield or obstruct justice on behalf of Donald Trump:

“If you stand with Trump, you are going down.”

Following the interview, the Bros for America discussed hot topics for the week, including news that the FBI raided Trump lawyer Michael Cohen’s home and office space as well as the hotel room he was staying in. They Bros panelists earn their fourth ‘E’ rating in four straight weeks for their vulgar language, especially the words to use their four nominees for Shithole of the Week.