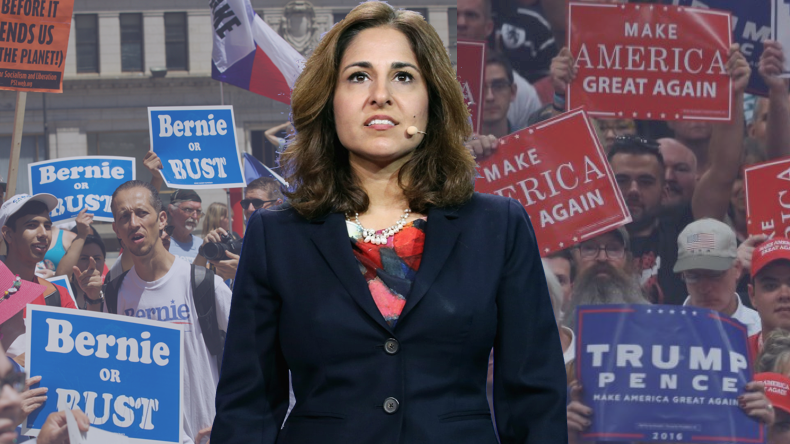 "If you're being attacked by the far left and the far right it only means you're doing something right," said this week's podcast guest Neera Tanden to host Alex Mohajer.

Make no mistake: there’s a reason that Neera Tanden is one of the most influential women in American politics. It’s not just because 10,000 of her private e-mails were stolen and sent out to the world during the now-infamous 2016 WikiLeaks e-mail drops, forever tying her to one of the most harrowing political sagas of all time (“but her emails!”).

That’s just a small part of her legacy. Tanden, who is the president of the Center for American Progress and named one of the most powerful women in Washington D.C. boasts a career spanning multiple decades and several presidential campaigns beginning with Michael Dukakis in 1988 and most recently for the first female major-party nominee for president in 2016.

It’s fair to say that Tanden has seen some things. Unsurprisingly, Russian operatives or government officials near or in touch with a presidential nominee is not one of them. Neera sat down with me and co-panelists Thomas McAbee and Daniel Fusselman to discuss Trump’s legitimacy, Russian involvement in the election and what this means for the upcoming SCOTUS confirmation of Brett Kavanaugh, and whether or not Democrats should impeach Trump.

“[The Trump campaign] had 72 contacts [with Russians],” Tanden said on the Bros4AMerica podcast. “I’ve worked on a few presidential campaigns. Neither I nor anyone I knew ever interacted with any Russians at any point on any campaign that I’ve ever been a part of. The fact that Donald Trump asked for help and on the same day Russians launched a major attack on [Hillary Clinton’s] email server…”

For those on the right cozying up to, and those on the left ignoring or minimizing the threat posed to our democracy by Vladimir Putin and his ongoing attacks on us…here's a little refresher about who we are dealing with. pic.twitter.com/qZoJuzIAO3

Clinton’s much-ballyhooed server, Tanden notes, is the only one to remain unscathed and uncompromised during the course of the Russian active measures cyber efforts.

When recalling those pesky stolen e-mails nearly two years out, Tanden is feeling settled about what was at the time “horrific,” “painful,” and the “worst moment of [her] professional life.”

“The fact that Donald Trump has colluded with Russia is by and large already proven at this point,” Tanden said in the interview. “The question is whether that collusion was legal or not.”

Indeed, our democracy is at a dangerous in-roads that only a concerned citizenry can overcome, regardless of whether blame can be attributed only to Russian interventionism or whether it constitutes criminal wrongdoing should not matter. It is wrong.

“If you’re unhappy about what happened to Hillary,” Tanden said, “get out there and vote [this November]!”

Register to vote for free and in 90 quick seconds here.

Tanden also had measured but resolute words for Mr. Trump, stating affirmatively that should the Democrats have the political courage, and should they indeed pull off a blue wave this November, that depending on Special Counsel Robert Mueller’s report, they “absolutely should impeach him.”

Neera joined our panelists to offer up her nomination for #Shithole of the Week. Do you agree with her assessment? Vote below.

Bros for America: The Podcast is now available across iTunes, Spotify, Google, and all other platforms. It is executive produced, hosted, and moderated by Alex Mohajer and features panelists and co-hosts Thomas McAbee, Rance Collins, and Daniel Fusselman. It is recorded using Skype and E-Camm Tools, edited using Audacity, and powered/distributed by Blubrry/Powerpress. The theme music is “Operatic 3” by Vibe Mountain, with Chris Zabriskie’s “It’s Always Too Late To Start” on closing credits. Interstitial music this week is “Let’s Be Friends” by Sylan. Special thanks to Nelson Melegrito, Matt Garrett, and Hillary Clinton.