Bros on the Ground: Christopher Gagliardi 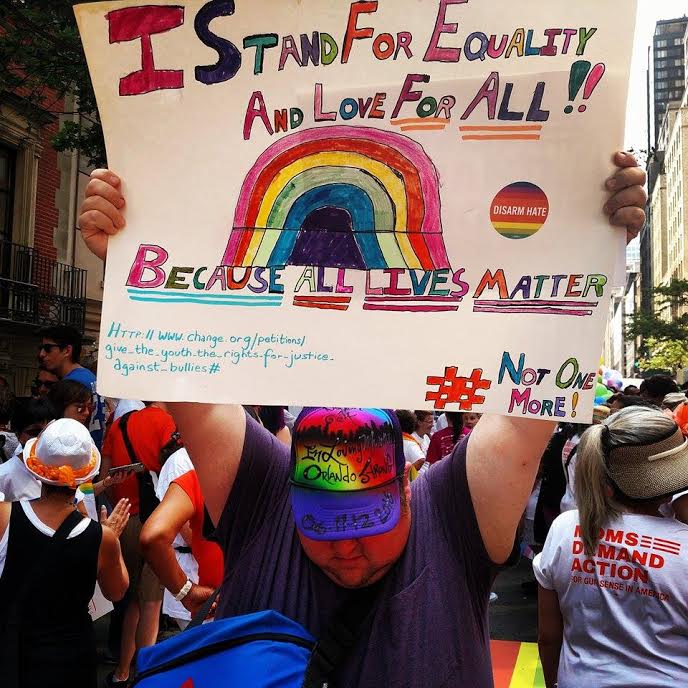 Christopher Gagliardi is a truly courageous and passionate member of Bros4Hillary who penned this moving and inspirational open letter to the Electoral College. Gagliardi is 35-years-old and lives with a condition known as infantile autism, though his spirit and passion are outsized by any measure. We hope you will take a moment to see just one of the many voices out there speaking up for what they believe in. – Editor

To the 538 members of the Electoral College:

I write today on behalf of all Americans from every walk of life, and especially Americans who have special needs. I write because I am voicing my utmost appeal to you to make a historic decision that can be done, and I write this with the fullest understanding, from the depths of my heart.

I am a 35-year-old male loving life to the fullest, enjoying everything that makes America a place that I love very much. But thirty-five years ago, I was born with a challenge called “infantile autism.” At that time, no one really understood autism, and my frequent “tantrums,” aloof affect, and inability to speak baffled the people around me. I felt like a caged animal, frustrated because I lacked the ability to explain my thoughts and feelings, and simultaneously oblivious to the fact that was I unable to communicate.

Autism can be lonely especially early on. I was the only one who knew how hard it was to be autistic, because I lived it and felt that no one could understand me or my experience. My hometown didn’t have the correct special education programs for autistic or other special needs children, so I was bussed out to other public schools in neighboring school districts, which presented it’s own challenges.

Among them was transitioning from a home and small-town environment to a new larger environment and school system. People with special needs are expected to acclimate, even in school, to common-place daily events like holiday celebrations, decorating the classrooms, and other activities. With no steps to help me transition, this was torturous and painful.

Then of course there is the horrific and painful reality of bullying. I was called names, called “retarded,” and subjected to physical violence, but my language abilities were not yet available to me and I didn’t have the capacity to tell my mom what was happening.

Soon I was developing my ability to speak, and as my physical ability grew so did my desire to speak out to support rights for those who needed them. My confidence grew and I was fortunate to have the warmth and endless support of people who believeed in me then and still believe in me now. The result has been a lifetime of breakthroughs: allowing my mom to hug me for the first time at sixteen-years-old after a bad encounter with bullying; a little acting, and some music; working as a community activist seeking to deliver a message about the rights of people with special needs; running for and winning roles in high school government up to and including student council president; and even taking a chance on college although there is still a need to fully address correct transitional programs for those with special needs seeking to move into a collegiate setting.

In 2005, because of my work as a community activist, I was honored by my political peers as a hero among Bergen County’s residents.

I did these things by transforming “the impossible into the possible,” and by refusing to surrender or listen to negativity. I accomplished these goals with the faith, love, and support of every single individual on my side that I was blessed to have surrounding along my entire journey.

Their love and support lead to my decision that I would dedicate my life to fighting for change through politics and to bring attention to the issues that affect citizens with special needs.  Whether at the grassroots level, by getting out the vote with phone banks, or deciding to run for New Jersey State Assembly in the 37th legislative district. You read that correctly. At the time, I was concerned that no one could truly represent the physically and mentally challenged citizens of our state. I educated myself on how to get onto the ballot, took the train with my petition and signatures to Trenton, New Jersey, and filed. My platform was simple: I was and still am for change in this country, a country I love so deeply.  My attempt at a run for elected office got attention in media outlets and the story reached as far as the northwestern United States.

In the summer of 2009, I won 15% in the primaries for my race. My opponents were so impressed that they appointed me the first Special Needs Outreach Advocate. We were able to get two pieces of legislation passed: one was to remove the word “retarded” from written legislation, the second was the passage of one of the toughest anti-bullying laws in the history of the United States.

I am proud of the liberties that have been afforded to me and I take seriously the solemn responsibility of protecting them. Which is why I must now use this word: INCLUSION. Inclusion means to eradicate the exclusion of physically and mentally challenged people who cannot enjoy a normal life in school or society. This is WRONG.  In my life, whenever I had doubts about my abilities or felt like I had failed, my dear friend and mentor Peter Noonan always told me: “You create your own destiny!”

This leads me to the point of my letter and why this important election effects not just me, but millions of people with special needs in our country. I was in absolute SHOCK when I watched Donald J. Trump mock a reporter with special needs during one of his campaign stops in the 2016 presidential election. When you attack and mock someone with special needs, it is not only a violation of their rights, but of every single citizen with special needs and their families, period.

I cannot and will not allow such a travesty of injustice to be done, not just to those who struggle with special needs day after day, but to women, LGBTQPIA citizens, and citizens of every faith, nationality, and creed. They all should be given the same historic opportunities that this nation has given to me. This election provided those citizens with a candidate who encompassed courage, compassion, grace, dignity and more throughout her entire life, and that has gone above and beyond the call of duty in fighting for every single individual’s god-given potential.

Hillary Clinton has been on the front lines since her early days at the Children’s Defense Fund, fighting for children and families in her role as first lady of Arkansas, then fighting to make healthcare more affordable as the first lady of this great land. As senator of New York she fought for 9/11 first responders. As secretary of state, she stood up for human rights across the globe.

Time and again she has proven herself to be the most qualified candidate to run for the presidency maybe ever. She possesses the strength to make a difference in this world and to build a future for the next generation. And that is something I strongly believe in: a future for the next generation free to get an education in peace without being bullied because of religion, gender, or sexual orientation. A future for women to be paid the same salaries for the same work as their male counterparts.

Donald Trump, on the other hand, DOES NOT represent America. The only thing that he represents is the almighty dollar, and when he looks out at his supporters and constituents, all he sees is money in his pocket. The hardship and struggle that people have endured for so long in silence due to bullying, because of traits that we were born with should not hold us back from what we can achieve and contribute to social progress. I am a human being. My life has value. My freedom I do not take lightly. All that my mom and I fought for is something we cherish deeply and yet he does not see us as American citizens trying to show the world that people with special needs can DO and ACCOMPLISH greatness! It is the fear Donald Trump used to make us feel small, unappreciated and worse.

Hillary Clinton sees us. People with special needs. Women who fought very hard to have their voices heard. The multi-faceted citizens of a great planet. Ronald Reagan, in his famous speech “A Time for Choosing,” made a bold claim when he said we all have a destiny. But he was correct.

Last and most importantly: Do I want a President that will make sure that those who have fought so hard for inclusion can finally be embraced by the world so that he can lead the next generation towards a better tomorrow? IT IS UP TO YOU now more than ever before in the history of humanity and in the history of The United States for the very first time, to stand up to this man and say: HATE ABSOLUTELY does NOT belong here, in the White House, or anywhere. LOVE DOES BELONG in America and the world!

NOW is the time! NOW is OUR moment! NOW is our chance to make history and do what is right for the future of this country. I pray and ask from my heart on behalf of “we, the people” that you hear the cries of “Love Trumps Hate” and “Good Can Win over Evil” and finally declare we reject demagogues like Donald Trump!

Please remember me and all those who fought so hard for their right to be heard and seen. Remember women. And most importantly, please, for the sake of people who seek the dream of equality, justice, love, compassion,  and for the great heroes who sacrificed everything for us to live in peace and freedom and be whatever we want to be: remember the people when you cast your votes on December 19th.

This country’s future rests with you, it is now in your hands!

Christopher Gagliardi is a guest contributor to Bros4Hillary, and you may contact him at guest@bros4hillary.com.  Alex Mohajer is the political director of Bros4Hillary and editor-in-chief of BrosBlog. You may tweet him @alexmohajer or e-mail him at alex@bros4hillary.com