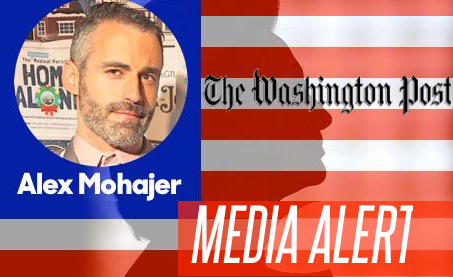 Bros4America’s very own Alex Mohajer was interviewed for a piece published in the January 10, 2017 edition of The Washington Post entitled “Men Slow To Show Support For Women’s March” regarding male support for female causes, particularly the Women’s March on Inauguration Day.

The piece, was written by Michael Chandler specifically about Bros4Hillary and their role in representing men who are enthusiastic about Clinton.

Prior to founding Bros4America in December 2016, Mohajer served as the Political Director of Bros4Hillary, the group where it all began. Founded by Nelseon Melegrito and Rance Collins in January 2016, Bros4Hillary was and is a proud supporter of women’s rights and will have at least some representation at the Women’s March.

Mohajer has written about the subject extensively in his capacity as a Political Writer and Commentator for The Huffington Post. His piece “In Politics, 2016 Was Year of the Bro” discusses the beginning days of Bros4Hillary and a male perspective on misogyny in the 2016 presidential election. You may find more of his content on Twitter @alexmohajer or on his Official Facebook page.