Bro of the Week: Manny 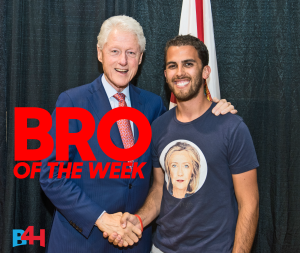 Congratulations to our week’s Bro of the Week, Manny Orozco!

The 22-year-old Florida native whose family migrated from Colombia, Manny is a Senior Political Science major at the University of Central Florida. Family comes first for him. It was his maternal grandparents that migrated to the United States in an effort to provide a lifetime of better opportunity. His grandfather came from the poorest places in Colombia and eventually owned his own store, saved enough money and expands his entrepreneurial ability. He is the reason why Manny fight every day- to lift his spirits up and overcome struggles of income disparity and give it all he can in pursuit of the American dream.

Growing up, he has encountered several divisions around him: from his community, state and the country. He wants to see a future filled with equal opportunity for every person. This is why he is for Hillary Clinton: he joined the campaign as a Field Organizer, spending countless hours a week, with weekly goals of making 1,000+ phone calls, registering 20 people a week, hosting events, phone banks- creating an amazing and inspiring grassroots movement. “She understands. She understands the battle. She understands what it takes to fight and never allow yourself to be knocked out. She is a fighter and as a President, she will fight for every person in America,” Manny further explained.

As a millennial who will be in the forefront of the grassroots movement today and the future, Manny believes this would be the last generation that lives through social inequalities. He appeals to this fellow millennial and this has to say: “Let’s help the world eradicate these inequalities. Let’s start leading. This is our future. Let’s start being the young people of America that take control and lead the world towards the best tomorrow we have yet to experience. We can start with a simple step: Voting. Let’s help elect the person that will continue leading us down the path towards world filled with pure equality and promise. For those reasons, I’m With Her.”

Thank you for all the hardworking and inspirational endeavor you have shared with us, Manny!