Bro of the Week: Lester 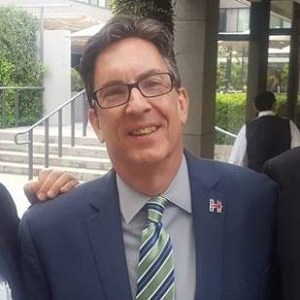 CONGRATULATIONS, Lester! You are this week’s Bro of the Week!

Lester is a passionate and relentless volunteer on the field, on the phones and on social media.  Lester has long been involved in politics. He first walked precincts in his family’s neighborhood in Puerto Rico 1980, when he was in High School, in support of the reelection of President Jimmy Carter.  Since then, he has volunteered for hundreds of Democratic campaigns and canvassed and telephoned voters in more than a dozen states.

In 1992 and 1996, he was a surrogate speaker in Bill Clinton’s campaign for President, translated Bill Clinton’s position papers into Spanish, went to every parade, fair and public event he could think of to spread the word and register voters, helped organize fundraisers and tried to help in every way that he could. To this day, he will tell you that helping to finally elect a Democrat as President is one of the most rewarding things he has ever done.

Lester’s political and social activism continued throughout the next two decades. In June 2008, he joined Love Honor Cherish in the fight to preserve marriage equality in California.  After Prop 8 unfortunately passed, he continued to fight to repeal it by any means possible.  Lester was also a founding member of the Latino Equality Alliance. Last year, he was elected to his second term as Community Vice President of the Stonewall Democratic Club and as delegate to the California Democratic Party annual convention.

This year he has raised thousands of dollars for Hilary, volunteered with the Hollywood for Hilary grassroots campaign and East SFV Valley for Hillary campaign, training and leading canvassers and phone bankers.  He attended and volunteered at several rallies with Bill and Hillary. He drove volunteers to Nevada on two consecutive weekends and served as legal observer with the Hilary for America legal team in that state’s crucial caucuses.  Last week, he attended the Democratic National Convention in Philadelphia.  In his spare time, Lester deftly fends off anti Hillary attacks on Facebook. Like Hilary, Lester is a fighter and he says he is just getting started.

When asked about his support for HRC, he had this to say:

“Hillary Clinton has been fighting for the things I believe in for a long time.  From her time with the Children’s Defense Fund, to her service as First lady of Arkansas, First Lady of the United States, U.S. Senator and Secretary of State, Hillary has led the fight for equal pay for women, to protect a woman’s right to choose, for equality for LGBTQ people around the world, to expand healthcare, protect the environment and to improve access to education.  She has the scars to show for her single minded pursuit of those goals and ideals and her resilience in the face of constant, vicious attacks tells me she has the mettle to be our leader, both domestically and internationally. The Presidency is not an entry-level job and the challenges we face are dead serious. I can think of no one more qualified to be our next President than Hillary Clinton, and I am proud to stand with her.”

Thank you for all that you do, Lester. For all your efforts, we honor you as Bro of the Week and can’t wait to see what the rest of this campaign has in store!