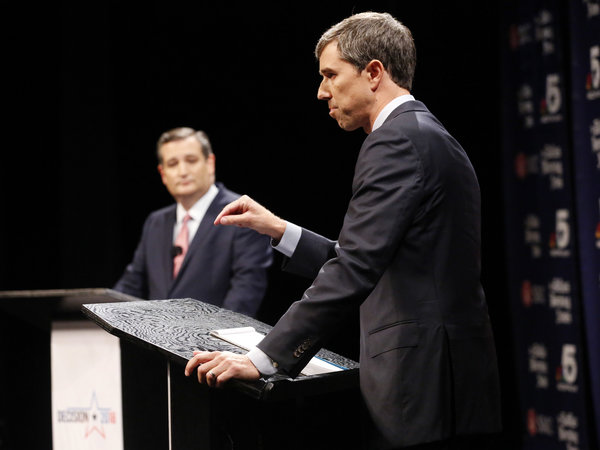 If you blinked, you may have missed one of the most riveting moments of the much-anticipated first debate between Republican U.S. Senator Ted Cruz and his Democratic challenger, Texas congressman Rep. Beto O’Rourke in what has become an unexpectedly competitive U.S. Senate race in Texas. It’s not often that Cruz has his trademark smug grin wiped off his face so effectively. But with three perfectly-timed, deadpanned words, O’Rourke managed to do just that.

It's not often that @TedCruz has that insincere grin wiped off his smug, weasel face. But in the final moments of the #TXSenateDebate last night, @BetoORourke managed it with three perfectly-timed deadpanned words. #TrueToForm pic.twitter.com/Ky4rO5QXN4

When both candidates were asked to pinpoint something they liked about one another, O’Rourke gave a thoughtful, generous response, praising Cruz for the sacrifice of taking highly-elected office. When the time came for Cruz to respond, he delivered a nauseating, smug, insincere non-answer attempting to tie O’Rourke to socialism and Vermont Senator Bernie Sanders.

O’Rourke waited and when those three magic words came, it was the clapback heard ’round the world. Well, at least in Texas anyway.

“True to form,” O’Rourke quipped just under the clock, managing to get the last word on Cruz. The barb effectively exposed Cruz:  when given the opportunity to be generous or kind towards others, to stop playing political football, Cruz will always opt to be a sniveling weasel. And a weasel he is.

It’s not clear to anyone just how he was able to secure a seat in high office. For all his advertised debate skill (he was a college debate champ, his literature will remind you at every turn), came away looking petty and outclassed, which he is and was. But isn’t he always? It’s somewhat of an open secret in Washington D.C. that nobody actually likes Senator Cruz. Cruz is openly despised by most of his notable Republican colleagues, and not because he’s a maverick or particularly independent. Ted Cruz doesn’t have an authentic bone in his body. From the hypocrisy of his hardline stance against DREAMers when he himself is the product of Cuban immigrants, to his angrily calling Donald Trump a coward for press cameras and then doing an about-face and making phone calls for the guy who insulted his wife and children.

R0lling Stone even ran a piece compiling all the hateful things notable colleagues have said about him and it’s a doozy.

For once, Republicans and Democrats can agree on something. Perhaps Ted Cruz is the one to finally end the Israeli-Palestinian conflict.

The cameras panned out with enough time to capture Cruz’ expression for just a moment — bewildered, surveying the audience, not sure if he had just been ridiculed or reaffirmed, a brief panic as he struggled to grasp why people were laughing

While true that the U.S. Senate race in Texas has become unexpectedly competitive, that’s only because its a surprise that Ted Cruz is even still in the running at all. O’Rourke, good-looking, charming, authentic, well-spoken, and also unafraid to stand by his beliefs and advocate for them in waters that historically have been less inclined to adopt progressive ideologies, makes him respectable and dignified. During the debate, he effectively tied Cruz to Washington-as-usual establishment types for his tactics.

The Bros4Beto, a subsidiary of Bros4America, have a 24/7 live discussion and support group that has thousands of active members responding in real-time. There are just over 40 days left before the 2018 midterm elections, and activist groups have been working since 2016 towards organizing a blue wave. You can check out the entire debate between Cruz and O’Rourke below.