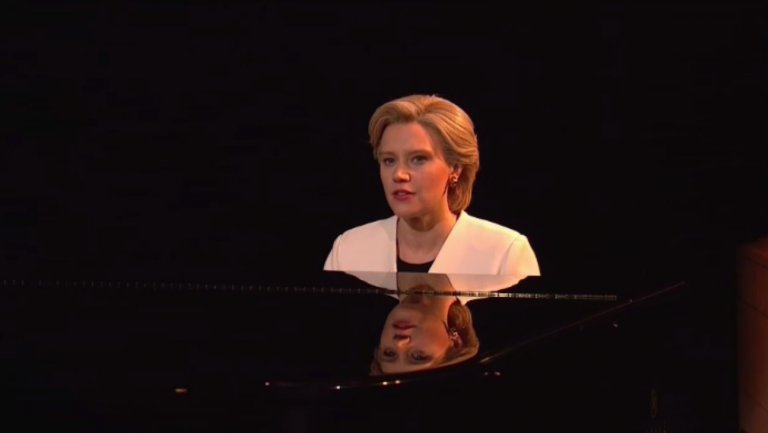 In a powerful statement by a late night comedy series known for its enduring brand of irreverent humor, tonight’s Saturday Night Live featured a somber homage to Hillary Clinton in the wake of a political upset in the presidential election that still has Americans across the country reeling.

In the cold open, Kate McKinnon donned her now-famous Hillary Clinton pantsuit and wig for an unusually somber and serious performance of Leonard Cohen’s ‘Hallelujah.” The legendary singer passed away this week at the age of 82, the same week of the general election that saw a presumptive victory for Donald Trump.

“I’m not giving up,” said McKinnon at the close of her performance, “and neither should you.”

The statement was laden with double meaning to advocates and organizers who support Clinton, especially among a growing faction of them who believe that so-called “faithless” members of the electoral college should vote in accordance with the popular vote and ensure a Hillary Clinton presidency.

“It is a somber message,” said Nelson Melegrito, the founder of advocacy group Bros4Hillary. “With protests happening across the country and now news reports that there is evidence of Russian hacking in Florida’s election systems, widespread voter suppression, it may be an avenue we need to look at officially.”

The New York Times is reporting that Hillary Clinton has won the popular vote by an apparently substantial margin, such that she has earned the most votes for the presidency in American history, second only to President Obama’s 2008 bid.

The group has announced a press release on Monday November 14, 2016 at 10:00 a.m. PST to be released at its website, www.bros4hillary.com.