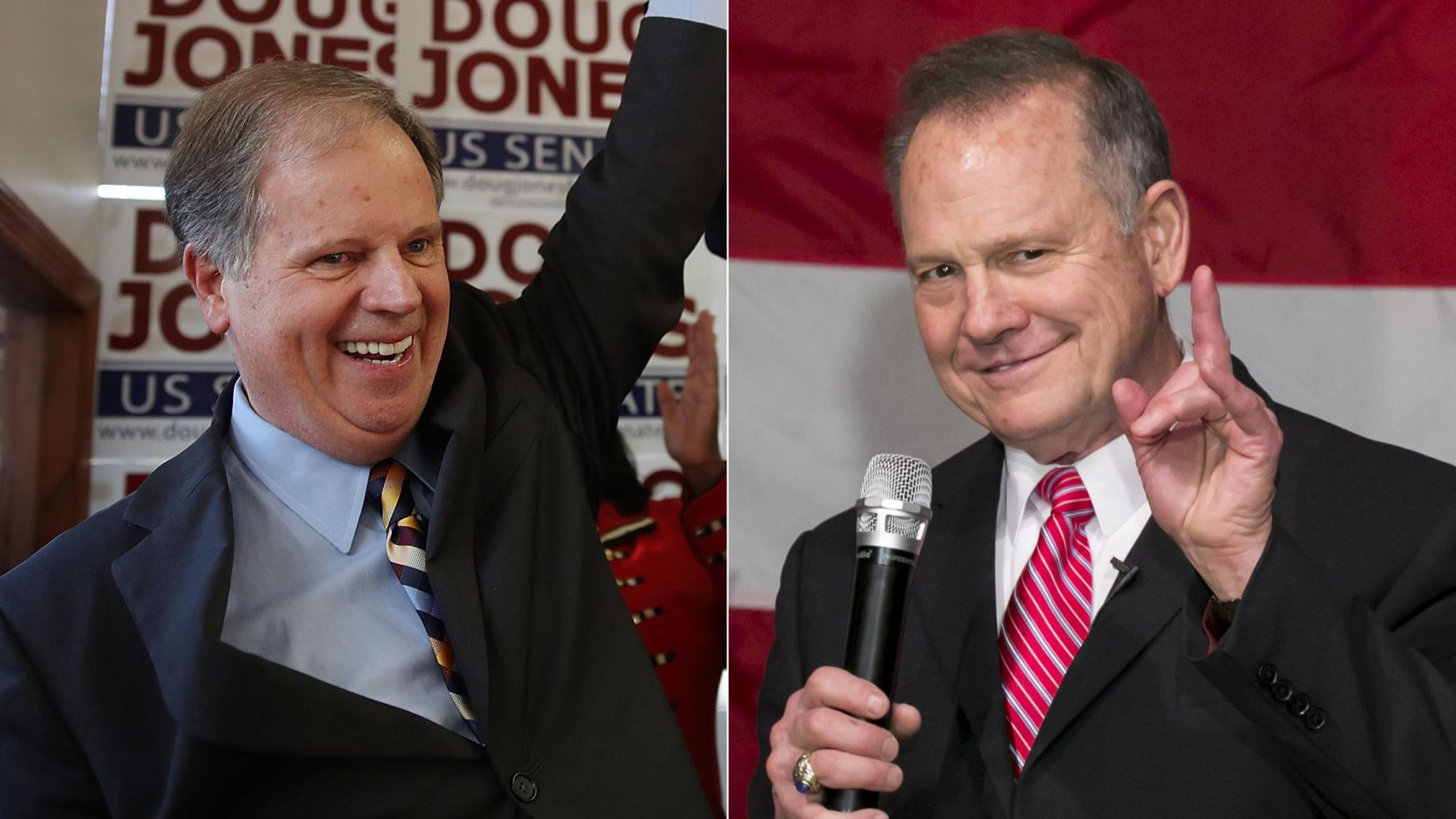 The Alabama Senate special election features former Alabama Supreme Court Judge Roy Moore (R) and federal prosecutor Doug Jones (D). While Trump won by 28 points, this race could be extremely close. Roy Moore has said anti Semitic statements (and defended them by saying his lawyer is Jewish). He also said amendments after the 10th were bad (including the ones allowing African Americans and women to vote). He has stated that LGBT people will go to hell. He has also said that Muslims should not serve in Congress. Finally, he has been accused of having relationships with young girls while he was in his 30s. Also, Roy Moore won a primary 54%-46% against the incumbent Senator, Luther Strange who won over college educated and urban Republicans. Many of the Strange supporters will not back Roy Moore.  These factors and the Democratic energy have caused a close race.

Some polls show Moore ahead, some show Jones ahead (the range of polls is Moore +9 to Jones +10). The argument that the polls showing Jones ahead are correct is that there is high Democratic enthusiasm that polls are not accounting for and that the automated polls which show Moore in the lead are not polling cellphones and voters who only use cellphones are more likely to support Jones. The argument that the polls are wrong in Moore’s favor is that voters do not want to admit to pollsters that they support Roy Moore because of the pedophilia. A Monmouth poll (they are considered reliable) released a poll showing a tied race but stated that if turnout is similar to the VA-Gov race (a race where the Democrat got unexpectedly high turnout and won by nine points despite polls showing him up by three), then Jones wins by three. The problem is that with no previous off year special election in Alabama, it is nearly impossible to predict the turnout. We personally predict a narrow Jones win due to the enthusiasm but with unpredictable turnout, we would not be surprised if we are wrong.

The polls do show that the way Doug Jones needs to win is by increasing African American turnout and winning enough college educated white Republicans. Statewide Democrats previously won Alabama by winning over rural white non college educated voters, specifically in northern Alabama. Most of those voters however are extreme social conservatives and have not voted Democratic in a statewide race in nearly a decade. Roy Moore is suited to win these voters overwhelmingly. Therefore, Doug Jones’s path will look different. It has four key goals:

Each county will have a corresponding goal next to it describing the key demographic in this county (for example, a county with a low college educated percentage and a high African American percentage will have “Goal one” next to it).

Also, here is a map of county benchmarks. The benchmarks were created combining the 2012 election for Alabama’s Supreme Court where Roy Moore won 52%-48% and the 2016 presidential election where Trump won 62%-34%. The benchmarks show what percentage Jones needs to hit in each county to win 50.1%-49.9%.

Once historically Republican, Jefferson County has shifted. It is now a swing county that leans Democratic in presidential elections. Jefferson County is home to Birmingham and 14% of the state’s population (it is the most populous county in Alabama). Even Bill Clinton failed to win it although he lost Alabama by only seven in 1996, the best statewide Democratic performance since  Jimmy Carter in 1980. With a 42% African American population and a high number of college educated suburban Republicans, Doug Jones will need both high African American turnout and flipping of Luther Strange voters (this is one of the four counties Luther Strange won in the primary), a high number in this county is crucial for Doug Jones. The benchmarks show that he most win Jefferson County by 32 points.

Montgomery County is the ideal Jones county. Not only does it have a high African American percentage, it has the third highest percentage of college educated residents (32%) in Alabama. Jones needs to get as many votes as possible from here and win a large margin. The benchmarks show that he needs to win here by 50 points.

This is one of three counties in Alabama where both Strange won and Clinton outperformed Romney. With NASA technology here in Huntsville, there are college educated white voters here. Doug Jones has spent a large amount of time, showing how important this area is. While Trump won here in 2016, Doug Jones needs to win here. His strategy depends on college educated voters flipping and with a 40.7% of the residents here having a college education (the second highest percentage in the state), it is critical that Doug Jones wins here. He must win Madison County by at least nine points (if Roy Moore overperforms the baseline in the rural areas, Doug Jones must win here by even more).

Doug Jones’s strategy hinges on turnout from African Americans, millennials (the University of Alabama is here) and college educated voters. Tuscaloosa County has those demographics similarly to Montgomery County (although on a smaller scale because the county voted for Trump). If Doug Jones wants to win, he needs millennial turnout on a similar scale to Ralph Northam in Virginia in the gubernatorial race. Doug Jones needs a +9 win here or higher.

This county, just north of Birmingham is extremely white, has only a 13% college educated population and is very rural. It is also a dry county (except for one city) and an initiative to allow alcohol sales throughout the county was defeated in 2012. Roy Moore will win here easily. This county voted 70-80 points in the last three presidential races. What Jones needs to do is to keep Moore’s margin at 50 points or lower.

This county has not voted Democratic in over 50 years. The recent results show that. Romney won 80% here and Trump won 72%-22% here in 2016. Doug Jones is unlikely to win here. If he wins Shelby County, this race is over. But he needs to make sure the margin is much narrower, closer to 20-25 points instead of 50-60 points. Shelby County is a suburban county of Birmingham. Shelby County is heavily white, college educated and backed Strange in the primary. 41% of the Shelby County residents are college educated, the highest percentage in a county in Alabama. Shelby County is also one of the four counties where Clinton in 2016 outperformed Obama. If Doug Jones wins statewide, it is because he was able to narrow Moore’s Shelby County margin to around 23 points (or lower).

This county is where Roy Moore is from and where he was banned from the mall. It is a semi rural and heavily white county. Trump won here by 51 points while winning by 28 points statewide so Roy Moore needs to hold onto this county. He is unpopular here and underperformed in the 2012 election. Jones needs to lose here by 11 points or less.

Swing Areas (these are must wins for both Doug Jones and Roy Moore):

With a 23% African American population, Lee County is close to the statewide average. As the home of Auburn, it has a high college educated population (34%). 23% of the population is between 18 and 24 so it is a key test of the millennial vote. Doug Jones campaigned at the football game between UAlabama and Auburn, hoping to get supporters from both schools. While Auburn and UAlabama may be rivals on the football field, in order for Doug Jones to win, he must win the counties containing both universities. He needs a +1 win here.

With a small city, some African Americans (33%) and some rural conservatives, Talladega County is a good representation of Alabama. It is also home to the place the movie “Talladega Nights” is about. In 2012 and 2016, it was in line with the statewide percentage. A win in Talladega County will show that Doug Jones was able to turnout African Americans and at least prevent rural conservatives from turning out to vote. Doug Jones needs a +2 win here.

Overall, when the results are reporting, as well as watching the swing counties of Talladega and Lee, keep these points in mind:

This is a table of all the benchmarks for every Alabama County: