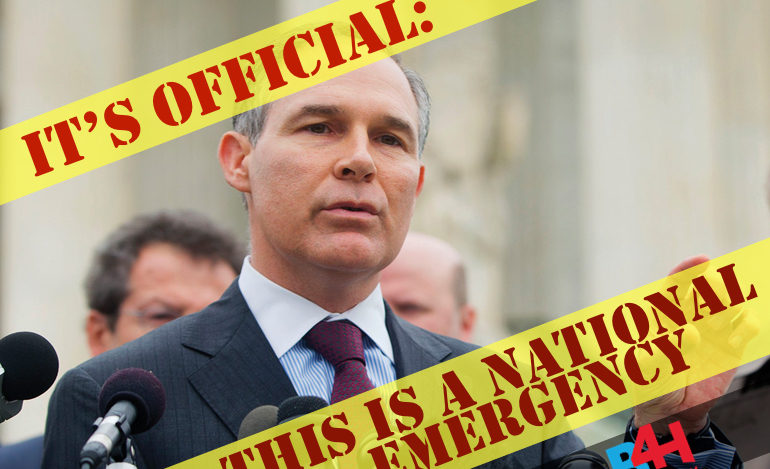 After careful consideration, I have decided to oppose the confirmation of Scott Pruitt for EPA Administrator https://t.co/QRuRtVua1X

PREVIOUSLY: Since December 7th, 2016, Bros4America has been voicing dire concerns regarding the appointment of Scott Pruitt, a climate change denier with ties to Big Oil and Gas, who believes that global warming is a “hoax,” to the Environmental Protections Agency (EPA). Among other things, Pruitt has sued and opposed the very institution he is now being tasked with leading multiple times.

From the New York Times:

“Mr. Pruitt, a Republican, has been a key architect of the legal battle against Mr. Obama’s climate change policies, actions that fit with the president-elect’s comments during the campaign. Mr. Trump has criticized the established science of human-caused global warming as a hoax, vowed to “cancel” the Paris accord committing nearly every nation to taking action to fight climate change, and attacked Mr. Obama’s signature global warming policy, the Clean Power Plan, as a “war on coal.”

WHAT ACTION TO TAKE

From our partners at Indivisible:

Scott Pruitt will need to be confirmed by the full Senate to be appointed administrator. Make sure your Senators know you oppose his confirmation. Call them today, organize, visit their regional offices, and don’t stop making your voice heard until they listen! Our health, and that of future generations, hangs in the balance.