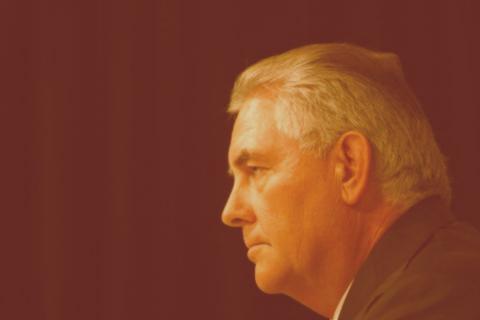 Senator Chuck Schumer has announced his plans to oppose the confirmation of Exxon Mobil CEO Rex Tillerson for Secretary of State.

Tillerson’s nomination is one of the most controversial of Donald Trump’s cabinet selections, and with good reasons. Tillerson has a long-standing oil deal with Russia dating back to 1999, and as recently as 2013, received the Friends of Russia Award directly from Russian President Vladimir Putin himself.

More troubling than Mr. Tillerson’s relationship with Russia and financial conflicts of interest, is the fact that as the CEO of a Big Oil company who refuses to divest from his holdings, he not only stands to reap a large benefit from the decisions made on the environment, but they could have potentially disastrous effects on the environment at a crucial turning point in the fight to reduce carbon emissions and reverse trends that will permanently damage our planet.

What can you do?

Tillerson must be confirmed by the full Senate in order to be appointed Secretary of State. If you are near the regional offices for your state’s United States Senator, visit! Voice your opposition. Or call the regional offices and demand that they vote down this terrible affront to our nation’s interests and national security.

If you live in any of these states, or know someone who does, place a call now and throughout the weekend. If it’s busy, keep trying, because phone calls are the most effective. You can find your Senator’s contact information here: https://www.senate.gov/general/contact_information/senators_cfm.cfm

“My name is [name], my zip code is [zip code], and I hope Senator [name] will vote no on Rex Tillerson for Secretary of State.”