A Play-By-Play Of The Press Conference From Hell With A "So-Called" President: VIDEO 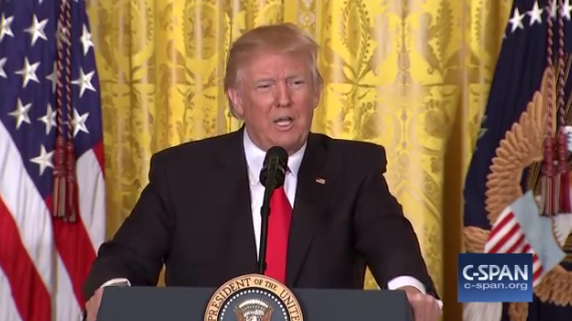 Anyone who watched Trump’s press conference today was left in shock, thinking to themselves, we have literally elected a lying, mentally unstable, temper tantrum throwing, 12 year old bully. In vintage fashion, Trump viciously attacked the press. He again called them “dishonest,” “liars,” “the worst,” “fake news,” “full of hate.” The list went on and on. He told reporters to “sit down,” “be quiet,” “stop asking bad questions.” He angrily defended his administration, saying his administration was not in chaos, but running like a “fine tuned machine.” He called headlines about Russia a “ruse,” claiming he has nothing to do with Russia. He claimed the leaks about Russia were real, but the info in those leaks “fake news.”

It was literally a 70 year old man throwing a temper tantrum, because he didn’t like tough questions and doesn’t like the way the press has covered him and his administration. Like a child, Trump was still obsessed with his election and the legitimacy of his win. He openly lied about the size of his electoral college win, proudly calling it the largest win since Reagan, only to be called out by the press with the actual numbers. He then deflected by saying, that’s what I was told, as if he couldn’t have googled it himself.

He defended Michael Flynn in a surreal moment, saying he didn’t instruct him to call Russia and didn’t know he was calling Russia, but had he been asked, he we would have instructed him to because that was his job. Well, if that was his job & he was doing what you would have wanted, then why did you just fire him? It literally made no sense. When asked about Russia’s recent actions: ballistic missile tests in violation of our treaty, a spy ship 30 miles off our coast and military jets buzzing our warships, all he had to say was “not good.”

That’s it. This from the man who lambasted Obama and called him weak for his response to Iranian boats harassing our destroyers. It was mind boggling. To make matters worse, he then blamed it all on the press and all the news coming out about Russia’s interference in our election and their contacts with the Trump campaign saying Russia was doing this because they can’t make a deal with Trump because the media have painted the relationship as tainted. In essence saying, if you shut up about Russia and my campaign’s collusion with them, then the Russian aggression will stop?

For the second day in a row he was asked about the rise in anti-Semitism and hate crimes since his election, and again he refused to address it. He instead relied on his daughter and son-in-law being Jewish and his meeting with Israeli Prime Minister, Benjamin Netanyahu yesterday as a defense of him being the least anti-Semitic person ever. He then went into his “strong” performance among Blacks & Hispanics on Election Day as proof that he was the least racist person ever & his “strong” performance among women as proof that he was the least misogynistic person ever. He then went onto to talk about how divided the country was & we’re going to take care of it. And we’re going to take care of crime. We’re going to do a lot of love. A lot of love?

By the end you were probably screaming at your TV–

It was the biggest word salad of nothingness I’ve ever witnessed. He proclaimed that he “inherited a mess, a total and complete mess” and painted a picture as if Obama had literally just shit in a basket and then handed it to him. He acted as if he was the one who had inherited a collapsing economy that was losing 800,000 jobs a month, with home prices plummeting and foreclosures & bankruptcies sky rocketing, with a stock market dropping like a rock and not Obama.

It was head scratching considering he inherited a growing economy, a record 81 months of consecutive job growth, Unemployment at 4.7%, a record high stock market, rising wages. I mean really, what “mess” did he inherit. Obama gave him a neatly wrapped Tiffany box, not a mess. He can try to spin it however he likes, but the numbers do not lie. I could go on for pages writing about how awful this press conference was, but I’ll simply end with this: America, let’s get this over with. We literally elected a man with the emotional capacity of a child and/or in the throes of severe mental illness. Impeach him. Replace him. Do what you have to do. But let’s not make believe any longer.