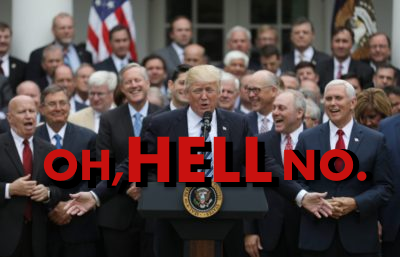 Republicans in the United States House of Representatives voted to repeal Obamacare on Thursday, and replace it with Donald Trump’s disastrous American Health Care Act, a bill being dubbed “the American Wealth Care Act.” The bill must now go before the United States Senate for a vote before it can arrive at Donald Trump’s desk for signing. Trump believes that the bill should pass through the Senate “easily. URGENT ACTION IS NEEDED.

Call your Senators and put the pressure on to vote NO on Donald Trump’s disastrous AHCA. This is not a “health care” plan, this is a “wealth care” plan. You can do this is in one of two ways:

Need help with what to say? Here’s a sample speech:

Hello, my name is _______. I am a constituent of Sen. _________, and I am calling to ask them to vote against repealing and replacing the Affordable Care Act with the American Health Care Act. I want to relay a clear message to them that it’s critical that the provisions and benefits of the Affordable Care Act remain in place. Since its passage, 20 million Americans have gained health care coverage, and our country is enjoying a record low uninsured rate.

If you feel comfortable adding it, try:

I will be following how my senator responds to the American Health Care Act, and it will factor into my vote come their time for reelection.

35 of the 217 Republicans who voted to repeal Obamacare on Thursday, May 4, 2017, are from vulnerable “swing districts” that are up for re-election in 2018. The efforts to repeal and replace these members of Congress must begin in earnest and it must do so now. Help donate to their challengers now. Their vote, which essentially strips 24 million Americans of their health insurance coverage and makes it easier for LGBT and female Americans to get coverage altogether, must receive a clear and loud response from the American electorate.

By state, the vulnerable Republicans are as follows. If your representative is on this list, or you just want to see them pay with their seats for this atrocious vote, then make a donation directly to their Democratic challengers.

Here’s the list of Swing District Republicans who voted for Trumpcare: