An Open Letter to the American People

Update: December 14th, 2016 – A version of this letter has made the front page of Huffington Post Politics. You can read it here.

Our nation is at a crossroads. On Tuesday, Americans cast their vote for president, and despite winning the majority of the popular vote by a substantial margin, Hillary Clinton will lose the presidency under the Electoral College system.

In any other election the conversation might end right here. But from the outset, this has not been an ordinary election year, and these are not ordinary circumstances. Donald Trump is the president-elect, he does not have a popular vote mandate, and his rival, Hillary Clinton, is on course to earn the most votes for a presidential candidate in history, second only to President Obama.

So what happened? Friends, we have been engaged in the politics of blame, and spent too long pointing fingers at one another. The blame game needs to end, and it needs to end NOW. Wallowing in our defeat is a mistake. Blaming our superb, historic candidate is a mistake. Infighting about who is to blame shifts the narrative away from what we should ALL be talking about:

The Electoral College must make Hillary Clinton president. They would be well within their constitutional authority to do so. Not only has she won the popular vote, but there has been a real and demonstrable systemic failure to protect the integrity of our elections that Americans, and the Electors, must wholly reject. This isn’t conspiracy theory. This isn’t conjecture. This isn’t poor sportsmanship. This isn’t even about Hillary Clinton anymore. This is about protecting our democracy. Free and fair elections are one of the cornerstones of American democracy and we have now seen credible reports that our rights thereto have been impeded upon by:

3) FBI Director Comey’s willful and intentional release of documents meant to suggest criminal wrongdoing by the Democratic nominee a week before the presidential election, shown to have had an impact on the outcome of the election; 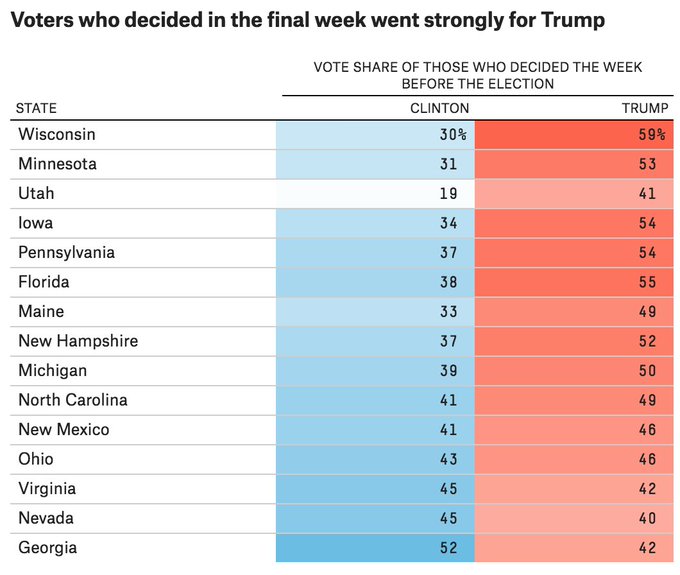 4) The use of Wikileaks as an agent for a hostile foreign power to hack e-mails and meddle with our election;

5) Potentially criminal conflict(s) of interest in Donald Trump’s business holdings, including ties to Russia, Vladimir Putin, and other foreign entities that run afoul of Article I Section 9 of the U.S. Constitution;

6) Trump’s publicly stated intention to NOT divest from said holdings;

7) “According to the exit polls conducted by Edison Research, Clinton won four key battleground states (NC, PA, WI, and FL) in the 2016 Presidential Election that she went on to lose in the computerized vote counts.”; 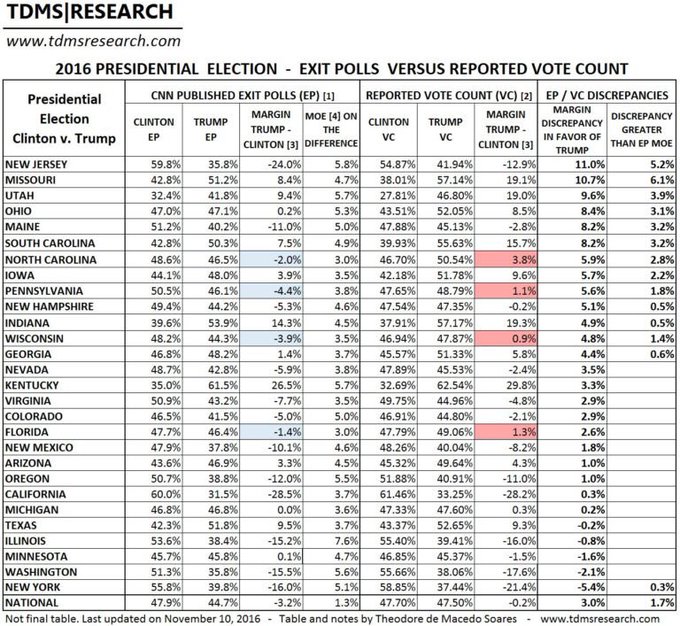 8) A systemic failure by the news media to differentiate false equivalencies or to report on falsehoods propagated about the Democratic nominee, as well as the epidemic of fake news;

9) 79,646 total votes across Wisconsin, Pennsylvania, and Michigan gave Donald Trump the electoral college victory in an election where more than 136 million votes were cast. Meanwhile, millions of valid absentee, provisional, and machine-error ballots were wrongfully disqualified.

10) Trump’s troubling reticence to acknowledge that he was even aware of Russian interference, despite his own potentially treasonous call to Russian forces to hack his opponent, and the fact that tens of millions of Americans heard the issue come up with Mrs. Clinton on the presidential debate stage in all. three. debates.

Unless you catch “hackers” in the act, it is very hard to determine who was doing the hacking. Why wasn’t this brought up before election?

I want to be clear-throated and painfully honest: The likelihood we are able to change the outcome of this election is small, the merits of the argument notwithstanding. However, we are called to action when justice requires it, not solely when we are favored to win. Sufficient evidence exists to show that but/for the influence of external actors, Donald Trump would not have etched out victories in crucial battleground states.

Donald Trump’s reticence to acknowledge the very real intervention by Russian forces, especially given his praise of Putin in the past, is a very troubling sign that he may have even been involved. We are facing a crucial global and sociopolitical crisis. If we do not respond to threats to our democracy, the epidemic of fake news, the various interventionist forces in our election, and demand action be taken, we are more culpable than either of the candidates in this election. Indeed, we are complicit in the downfall of democracy itself.

In the six days since the election, there have been massive daily demonstrations in cities all over America, where news outlets have reported as many as 100,000 people protesting for their right to free and fair elections.

The biggest advocate for bypassing the Electoral College completely? The president-elect himsel

Therefore, we are asking all our fellow Americans, but particularly Republicans who have watched this nightmare unfold and are willing see justice done in the name of Country, to join us:

We will add resources and information as we gather it to our Election Watch 2016 Daily Digest.

Finally, this is a personally painful moment for many of us and we want to join this effort for posterity’s sake. For Hillary’s sake. For America’s sake. Please rest assured that in the days ahead, no matter the outcome, our organization will be there renewed and ready to fight for a progressive and inclusive legislative agenda, to fight regressive policies that hurt LGBT people, minorities, immigrants, and women, and to make Hillary proud of the legacy she inspired.

Alex Mohajer, Political Director
and the Bros4Hillary Executive Board

Alex Mohajer is the Political Director of Bros4Hillary and serves as the Editor-in-Chief of BrosBlog. You may contact him directly at alex@bros4hillary.com or on Twitter @alexmohajer.